Getting it right FLINT TWP. — Najib Saab is a co-owner of the new Beef & Barley restaurant in the Lincor Plaza on Linden Road. His name was misspelled in a Dec. 12 business article. — R.S. Another auto pioneer statue ready for bronzing FLINT TWP. — The Back to the Bricks Committee recently announced that a statue of automotive […]

Snowplow contractor sought by board

FLINT TWP. — The Flint Township Board is accepting bids for a snowplow contractor at six township properties — the township hall, police station, three fire stations and the senior citizens center/library. Clerk Kim Courts said she found out recently that Fick Excavating of Swartz Creek, which has handled the job for several years, is no longer available. Trustee Barb […] 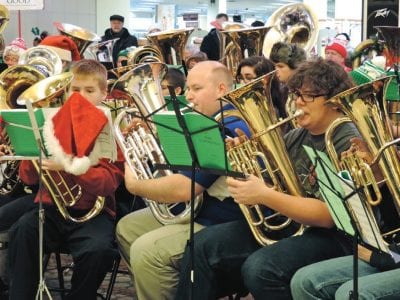 Tuba or not tuba


That was never in question for Carman- Ainsworth High School Band Director Benjy Jones and several CAHS band members who were among 58 tuba and euphonium players from 17 area high schools and colleges who performed last Saturday in the annual TubaChristmas concert at Genesee Valley Center mall. 2013 marks the 40th anniversary for TubaChristmas concerts/events presented worldwide, sponsored by […]