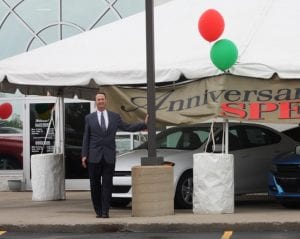 FENTON — A decade of outstanding and unwavering success, public accolades galore, stellar level dealership awards attained, and an unparalleled number of devoted customers may be attributed to something as positively and simply ingrained “as a good old Catholic upbringing,” said Hall Chrysler Jeep Dodge Ram Owner Jim Hall, rejoicing and welcoming all in a 10th Anniversary community centered celebration this month.

Hall and his brother Tim (General Manager) grew into adulthood with a “what would Jesus do” moral center, and have intertwined that in business. “Hey, it works,” said Jim Hall. “For example, someone just came in here and had an issue with a car, and we gave them a vehicle to use. They were shocked. They didn’t have to ask. It is how we do things. Every human needs someone to help them, relate to them, and make things in this busy life a little easier in doing so. We pride ourselves on that emphasis of fostering relationships with our customers. It has also proven to be the reason we are honored with the title of Top Customer Experience Dealer (formerly titled by the automotive giant, as the Five Star award.) We exceed Chrysler’s standards for making people feel valued here.”

The basics simply work, according to the Grand Blanc native.

“It is all about treating others as we would want to be treated ourselves. Sure, we may not make as much money as some dealerships, but we have the highest rate of returning customers. We are about honesty. We try to do things right. Everybody has a busy life. When they take time out to look for a car, we want to make it an option where they can go to one place, feel comfortable, and leave knowing when they pull out of the parking lot, we are there for them, anytime they need or want to drive back in,” he said.

Life isn’t perfect, sometimes even the greatest machines falter, and often the demands and desires of customers change quickly. With that as a known given in the day-to-day, Hall feels the mark of a great business is on how mistakes are handled and the manner in which a dealership addresses recovery for an issue.

Beyond remembering and reinforcing in the work environment the aspect of treating people as one would want to be treated, Hall hasn’t forgotten another important element that informs his overall business sensibility.

In years prior to his venture into automotive sales, he was an average car customer too, and he can still remember the feeling and vibe of visiting a dealership unlike his own. The memory hasn’t faded.

Hall can visualize and touch the sensation of an err of caution or worry evoked when entering the doors to a dealer where there were guys outside smoking, looking shady, and the feeling imparted of discomfort with impending high-pressure sales and a sense of getting far less for your money than one should.

“If you really want to say thanks to the people, I just assume give them the most phenomenal deal,” he said.

At Hall Chrysler, a deal doesn’t equate with less, or the word boring.

In example, Hall mentioned the popular 200 series, noting a purchase or lease of that kind fills a driver with pride because of the stylish ride they are seen in, that was also purchased well within their budget.

“The culture of our business is about doing the good thing. We take care of people. It gets noticed. They will drive for miles to come to us, and they tell many of their friends and neighbors. We are known for being professional and caring. We go above and beyond. That is how we shine,” said Hall.

The month-long 10 year celebration started full-swing this week, with an agenda of events and fun community related dates and contests continuing.

They also will be back live remote broadcasting from the dealership on May 29. For the entire weekend cook-offs, special lunches, and ice cream from Uncle Ray’s will be provided to all who want to share in the party.

Contests are on-going with prizes such as Detroit Tigers and Michigan Adventure tickets.

One of Hall’s employees came up with an exciting scavenger hunt concept, with clues provided online. On the dealership’s Facebook page, a hint for a different visit to a featured local spot of social importance or much favor is posted often. Then the first person to visit that locale or business wins a prize. Last week, the winner found a Kindle Fire treasure at The French Laundry.

The contest celebrates Hall’s 10 years of success, but also involves other businesses in the community, gathers the public to be socially-keen to embrace all the area has to offer, and really drives home the steadfast dedication on the part of the Hall’s and their staff, of selling to people and not to numbers.

Jim and Tim Hall have a moral compass directing their business decisions and it has been the mode by which Jim (the elder of the two) believes is the very reason they are currently able to bask in a decade of exceptional corporate and public approval for operating a superior dealership of known excellence.