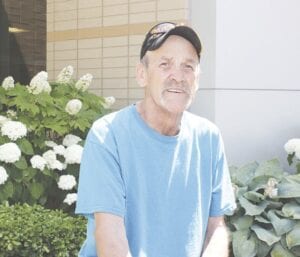 Gary Howard (r) of Mt. Morris rings the victory bell at the McLaren Proton Therapy Center in Flint. This ritual signifies the end of treatment and represents a graduation for the cancer patient. Photos provided

FLINT — The McLaren Proton Therapy Center’s 100th patient has rung the victory bell to signify the completion of his cancer treatment.

When Gary Howard of Mt. Morris was diagnosed with base of tongue cancer, he wanted to receive his cancer care within the McLaren Health Care system. The comprehensive team at the Karmanos Cancer Institute (KCI) at McLaren Flint and the McLaren Proton Therapy Center worked collaboratively to come up with the best treatment options for Howard. Along with chemotherapy, Howard chose proton therapy treatments instead of conventional radiation.

“With protons, the radiation only hits what it’s aimed at,” explains Howard. “That’s what I liked about it because regular radiation would go from here all the way through here,” as he points to both sides of his neck. “After treating one area, the table turned around so I could receive treatment on the other side.”

With proton therapy, there is no exit dose, so radiation stops at the boundary of the tumor without exposing much of the surrounding healthy tissue. Howard’s oral cancer had advanced and spread to his lymph nodes in his neck, and the tumors were particularly tough to treat due to their proximity to the spinal cord. Hesham Gayar, Medical Director of the McLaren Proton Therapy Center, and his team were able to precisely target the tumors while minimizing radiation to uninvolved healthy tissues. 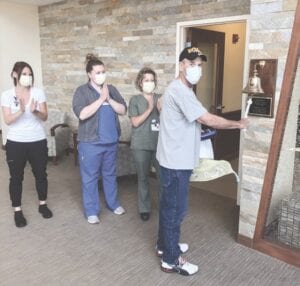 Gary Howard is the McLaren Proton Therapy Center’s 100th patient. He received treatment for base of the tongue cancer at the Flint cancer center. Howard finished his treatments at the end of June and is doing well.

“Head and neck cancers are good examples of how proton therapy can improve outcomes, tolerance and quality of life after treatments, compared to X-ray radiation,” says Dr. Gayar. “With proton therapy, healthy tissue and organs are spared more than 70% of unnecessary radiation delivered by other methods, leaving patients with possibly fewer side effects and complications.”

Due to the location of the cancer sites, Howard did experience some side effects, but his side effects were much less than if he would have had traditional radiation treatment.

“Mr. Howard had complete response of his cancer with proton therapy,” explains Dr. Gayar. “He experienced the expected side effects due to the location of the tumor. That includes slight complications with swallowing, speech and temporary facial hair loss. Mr. Howard experienced less side effects and less permanent damage to healthy tissue compared to conventional radiation and he is recovering quite well.”

Howard started his proton therapy treatments simultaneously with chemotherapy in April, and after 10 weeks, he finally had his patient graduation. He rang the victory bell at the end of June.