10th season of ‘Shakespeare in the Park’ comes to Genesee County 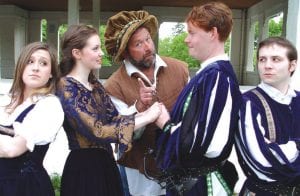 From left, Ella Thorp, Caroline Collins, Brian Haggard, Philip Kautz and Benjamin Segal head a large and lively cast for “Much Ado About Nothing.”

GENESEE COUNTY — For 10 years, Flint’s “Shakespeare in the Park” in Kearsley Park has drawn rave reviews and enthusiastic crowds. Again this year, the production is going beyond Kearsley Park to parks across the city and county.

Admission to all performances (except the opening night fundraising gala at Kearsley Park) is free. Please bring lawn chairs everywhere except Kearsley Park. The Opening Gala at Kearsley Park features strawberries and cream before the show and champagne by candlelight afterwards with the actors, all compliments of Fandangles’. Gala tickets are $25 and up.

This year’s production — Much Ado About Nothing — is generally considered one of Shakespeare’s best comedies, because it combines elements of robust hilarity with more serious meditations on honor, shame and court politics.

It opens at Kearsley Park with performances on June 14-16 then moves to For-Mar Nature Preserve, Linden’s Clover Beach and Flushing County Park.

Although the young lovers Hero and Claudio provide the main impetus for the plot, the courtship between the wittier, wiser lovers Benedick and Beatrice is what makes Much Ado About Nothing so memorable. Benedick and Beatrice argue with delightful wit, and Shakespeare develops their journey from antagonism to sincere love and affection with a rich sense of humor and compassion.

Benedick and Beatrice are tricked into confessing their love for each other, and Claudio is tricked into rejecting Hero at the altar on the erroneous belief that she has been unfaithful. However, Dogberry, a Constable who is a master of malapropisms, discovers the evil trickery of the villain, Don John. In the end, Don John runs away and everyone else joins in a celebration of the marriages of the two couples.

The play is directed by Kay Kelly.

The full schedule of performance dates is: