15 selected by Firebirds in OHL Draft 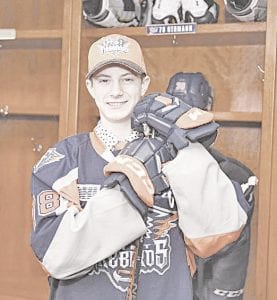 First-round pick Brennan Othmann poses in his new duds during a press conference on Saturday at the Dort Federal Event Center. Photo by Todd Boone/Flint Firebirds

FLINT — The Flint Firebirds bolstered their roster over the weekend, adding 15 prospects in the annual Ontario Hockey League Draft. With the second overall pick, Flint selected Brennan Othmann, a forward from Pickering, Ont., who registered 66 goals and 80 assists throughout 72 games with the Don Mills Flyers Minor Midget AAA.

“It’s a dream come true for me, ever since I was a kid I wanted to play in the OHL and I think Flint’s a great fit, I’m really excited,” said Othmann. “Our coach Eric Wellwood has earned three Memorial Cups, so I want to be a part of his fourth one and I know he wants to get that done here in Flint. I’ve already spoke with a few of the players on the team and they’ve told me how good the chemistry is inside the locker room. I think we’re going to have a very good team next year.”

In the second round, Flint selected center Braeden Kressler from the Mississauga Senators Minor Midget AAA and followed that up by taking Tyler Dunbar in the third round. Dunbar is a defenseman who suited up for the Soo Thunderbirds Minor Midget AAA last year.

Flint’s next selection wasn’t until the sixth round when they added Jack Silich, a right wing from the Chicago Mission 15’S. In the seventh round, it was Ty Gallagher, a defenseman with local ties having played for Detroit Compuware 16U.

Also from Detroit Compuware 16U is right wing Jack Stolicker, who the Firebirds selected in the eighth round. In the ninth round, Flint picked up center Patrick Saini of the North York Rangers Minor Midget AAA before adding Edward Moskowitz in round 10. Moskowitz is a left wing who played for the Don Mills Flyers Minor Midget AAA.

The 11th round came with the selection of center Carlile Owen who played for the Oakland Jr. Grizzlies 15’S. Center Kyle Maloney was taken in the 12th round after playing for the Waterloo Wolves Minor Midget AAA.

In round 13 it was Amadeus Lombardi, a center from the Toronto Titans Minor Midget AAA. Defenseman Joshua Vagenas of the Halton Hills Hurricanes Minor Midget AAA was taken in the 14th round and in the 15th round, the Firebirds took Jacob Clelen- Gough.

He plays defenseman and comes from the Niagara North Stars Minor Midget AAA.