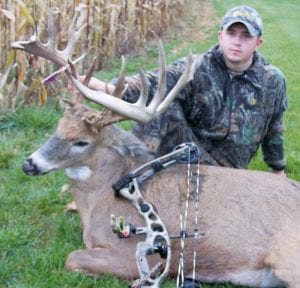 NORTH BRANCH
— Kyle Bonner, 21, of North Branch will have quite the “tail” to tell for some time after bagging this beauty on October 23 at 6:20 p.m. in North Branch.

Bonner says the buck has been known in the area for the last two years with many locals videotaping the deer last year.

This time around Bonner made his own video of the deer and his brother caught him on his trail cam just a month before bow season.

“Everyone locally was after this deer, so when I (saw) and shot him it was just unbelievable,” Bonner said.

Bonner said his trophy buck weighed in at 225 lbs. live, about 180 lbs. field dressed. The antlers have already been removed and the deer is in the freezer waiting for Bonner’s taxidermist to return from his own hunting expedition up north.

“This one’s going on my wall for sure,” Bonner added.

“From what everyone is saying, it’s the biggest one in Lapeer County. I’ve been getting calls and texts from all over—Lansing, Saginaw, locally, asking if I saw the big buck shot in North Branch,” Bonner noted.