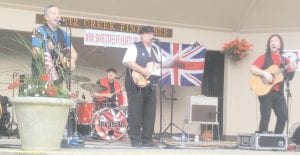 Invasion band members wowed the crowd with their authentic renditions of everything British, from the Beatles to The Who. Photos by Lania Rocha

Crowds consistently numbered around 800 on the hill at the Pajtas Theater. The final concert, featuring the Invasion band, drew more than 850 people.

“I’d say we were in the 5,000 range for the season,” said Dave Spillane, Association president. “We started on a good foot with good attendance and built each week. Having weather that allowed for good attendance helped everything, it helped concessions, and made it easier to get next season going.”

The folk duo Mustards Retreat opened the season but the rest of the playbill featured rock music from the ‘50s, ‘60s and ‘70s.

“Everyone I spoke with was very pleased (with the lineup) and enthusiastic about the choices we made,” Spillane said. “We were getting requests to work-in a country band here and there. Our crowd seems mostly to respond to the rock and roll, though. We’ve had country bands, but my feeling is the ‘60s and ‘70s rock and roll is what the people want to hear – the songs they remember, songs they grew up with.”

Spillane said he tries not to bring in too many of the same acts year after year, and he looks for performers who haven’t taken the stage in a lot of other area venues.

“We’re doing a pretty good job of that,” he said. “It’s hard to compete with some communities that have deeper pockets, but we do the best we can. We don’t ask for tax money and don’t badger people for donations. We do pass the bucket and that helps tremendously.”

The Knights of Columbus also pitched in, donating $1,212 in proceeds from last year’s Bob Smeets Memorial Coney Night dinner, which takes place during the last concert of the season.

“It’s so nice that they turn the money back to us,” said Spillane. “And our regular sponsors have been very consistent and loyal. The raffle donors have been unbelievable. This year, we had people coming up to us offering to donate raffle prizes.”

Concertgoers receive free raffle tickets, which allows the association to track attendance. The tickets go into a bin for the grand prize drawing at the final concert. Every year, Roger Sharp, a founding member of the association, donates the grand prize of four tickets to a Detroit Tigers game, and a limousine ride to the stadium.

This year’s winner was first-time concertgoer Katie Eagleson. A Tiger fan, Eagleson said she almost backed out of going to the concert with her mom, Cheri, a frequent visitor.

Eagleson said she will go to the game with her mom, and invite her sister and brother-inlaw to go, too.

Spillane said he is still looking to boost membership in the association, which has been waning the last several years. Memberships help bring quality entertainment to the amphitheater stage.

Additional information on the association, the concert program and membership is available at swartzcreekfinearts.org/.