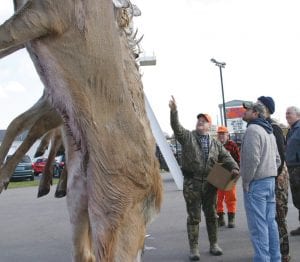 Hunters in the southern portions of the state enjoyed a successful firearm season, as area buck poles were brimming with deer.

STATEWIDE
— With just two weeks left in the 2010 deer hunting season, state officials at the Dept. of Natural Resources and Environment report that initial estimates indicate that firearm hunters killed about the same number of deer statewide as they did in 2009.

Preliminary reports varied widely, showing significant increases in some areas, but drops in harvest numbers and hunters in others. Speculation was that was in part because of the larger numbers of deer around the excellent mast crops available this fall.

Also expected was the recovering deer numbers in northern regions of the state because of the mild winter conditions from 2009-2010. However, hunter numbers appeared down—especially on public land statewide—most likely because this year’s opening day of the firearm deer hunting season fell on a Monday.

“Most deer hunters support maintaining the traditional season dates of Nov. 15 through 30, but we consistently see a drop in hunter numbers in those years that the season opens on a Monday,” said DNRE Wildlife Division Chief Russ Mason. “This may need to be a topic for discussion as we move to form Regional Deer Advisory Teams and engage our conservation partners to discuss long-range management goals.”

Rudolph stressed that the results put out are preliminary and will be replaced by the final harvest figures and participation generated by the state’s annual mail survey. The mail survey and hunter participation surveys are completed once all deer seasons are concluded. Muzzleloader seasons end Dec. 19 statewide.

Preliminary estimates from 2009 suggested a decline of 10 to 20 percent from the prior season harvest, and the final mail survey results showed a decline of 19.8 percent in the firearm kill.

To learn more about hunting opportunities in Michigan, visit www.michigan.

gov/hunting
or for additional information about deer logon to www.michigan.

AREAWIDE
— Thanks to the many callers and e-mailers, the bird in question in last week’s outdoors article is indeed a female India blue peahen. They are quite common in the area and the bird in question was simply outside of its normal breeding habitat hanging out with some wild turkeys. The peacocks do not crossbreed with wild turkeys and are commonly referred to as peafowl.