2012 MARKS 95 YEARS IN THE TRUCK BUSINESS FOR CHEVROLET 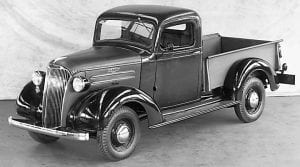 It started with a simple idea – a few car chassis fitted with hand-built beds to help carry materials around a booming car factory. Before long, millions of Chevrolet pickups were woven into the fabric of a fast-growing country.

Chevy trucks tackled the toughest jobs on farms and in the fields, hauled tools and lumber to the burgeoning suburbs and carried families and friends into the wilds for well-earned vacations.

“The legacy that Chevrolet trucks have built over the last 95 years is important to protect,” said Don Johnson, Chevrolet vice president of Sales and Service. “The best way for us to do that is by delivering the capability and technology our customers have grown to expect, in both our current trucks and in our next generation of full-size pickups.”

Here are some Chevy truck highlights:

• 1918 Four-Ninety Half-Ton – Although there are indications that some Four-Ninety based trucks were built for internal use in 1916, and that a few even earlier chassis may have been converted to ambulances and sent to France in 1914, the first customer chassis appears to have been built in Flint on Nov. 22, 1916, and shipped from the factory on Dec. 2 that year.

Two four-cylinder models marked Chevrolet’s formal entry into the truck market for the 1918 model year. Both were cowl chassis units that came from the factory with only frontal sheet metal. It was customary at the time for buyers to obtain a wooden cab and cargo box or panel van body to suit their purposes.

Priced at $595, the half-ton Light Delivery cowl chassis was essentially a bodyless Chevrolet Four Ninety car equipped with stronger rear springs. Mounted with a pickup box or panel body, it provided an agile and economical lightdelivery truck for small businesses popping up across America in the boom following the First World War.

The second model, a 1-ton capacity 1918 Chevrolet “Model T” (presumably for “Truck”) cost $1,125 without a body. It was based on the FA-series car, and was built on a truck frame that was longer and stronger than the half-ton model. A 37-horsepower engine gave the larger truck the power to haul heavier loads at a governor- limited top speed of 25mph.

• 1930 Chevrolet Pickup – The simple cowl chassis models were replaced in the 1930s by factory-built pickups, which initially came with roadster and closed bodies. Chevrolet bought the Martin-Parry body company in 1930 and quickly began selling steel-body half-ton pickups complete with a factory-installed bed.

At the heart of these new pickups was a new Chevy inline six-cylinder engine, which soon earned names like “Cast Iron Wonder” and “Stovebolt” for its rugged design. First produced in late 1928, the new engine had a modern overhead valve design. Inline six-cylinder engines became a mainstay in Chevrolet cars and trucks for decades to come.

By the mid-1930s, half-ton pickups with factory installed steel boxes had become the lifeblood of the truck market, with brands like Mack, Studebaker, Reo, and International competing with Chevy, GMC, Ford and Dodge.

• 1937 Chevrolet Half-Ton Pickup – In the mid-1930s, as the U.S. economy began to recover from the Great Depression, Chevrolet pushed for leadership in a reviving truck market