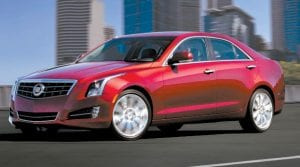 Producing a car that was named 2013 North American Car of the Year means paying attention to detail. And that’s just what Cadillac did when engineering the ATS’s sight lines.

Engineers worked to identify the vehicle attributes needed to maximize ATS’s driving character by making the most of sight lines. New visibility metrics developed from customer clinics in the United States and Germany consider exterior mirror and A-pillar area size, seat height, forward vision distance, side vision distance, and intrusive objects in windows such as rear headrests and the interior rearview mirror.

“Conducting clinics in Europe as well as the U.S. provided in- valuable insight into the needs of drivers who use demanding roads like the Autobahn,” said Raj Mehta, General Motors vehicle architecture engineering group manager. “The findings led to new ways of measuring and evaluating visibility despite its highly subjective sensory nature.”

“Smart design and the use of advanced materials like ultra-high strength steel help provide ATS drivers with a clear view of the road ahead and advanced technologies help extend their vision around the car,” said David Leone, executive chief engineer. “Our ability to execute good visibility based on robust scientific methods will be an important tool in the development of Cadillacs to come.”