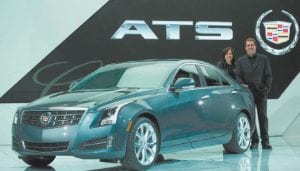 The 2013 Cadillac ATS triumphed over 14 other vehicles from a global pack of automakers to bring home the North American Car of the Year award.

A panel of 49 automotive journalists gave top marks to the compact luxury sports sedan, scrutinizing every new car released in the past year, including entries from Chrysler LLC and Ford Motor Co., as well as Audi, Mercedes- Benz, Volvo and Infiniti.

“This is a very meaningful honor for the entire Cadillac team, especially the men and women who build the ATS in Lansing, Michigan, and our dedicated and talented designers and engineers,” said Bob Ferguson, General Motors vice president for global Cadillac.

Jim Vurpillat, director of global marketing for Cadillac, discussed the number one factor judges mentioned in selecting the ATS for the award.

“We talked to a number of them and one of their judging criteria is how well does the car deliver on what the people who are going to buy cars in that segment want,” he said.

“In this case, for the ATS and other compact luxury sedans . . . They want styling, they want performance and they want fun-to- drive . . . They said, ‘It’s just so much fun driving this car,’ and that set it apart from the cars it competes against and all the other candidates for Car of the Year.”

The compact sports sedan is also playing a vital role in expanding Cadillac’s customer base by bringing in buyers to the showroom who haven’t considered a Cadillac in the past.

“For us, the ATS is so important because the compact luxury sedan is the largest segment in the luxury class and one where we haven’t had an entry, so that’s important from a size perspective and in terms of volume,” Vurpillat said.

“But at the same time, it’s also the segment where most people come into (the luxury segment) for the first time.