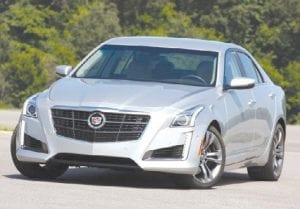 The 2014 Cadillac CTS sedan has been named Motor Trend magazine’s Car of the Year for 2014.

“The all-new 2014 Cadillac CTS prevailed over one of the most competitive fields in recent memory because it best met our award’s key criteria,” said Motor Trend editor-in-chief Ed Loh.

Cadillac spokesman David Caldwell said, “We are absolutely excited to win this award. It’s just sensational, and it’s quite a difficult award to win. The selection process is a grueling one in which every significant new car in the world is tested ‘in battle.’

“We knew we had a compelling design and it’s great news and validation of the work done by the people in Lansing and in Warren.”

Caldwell said the Cadillac designers took lessons they learned from around the world and applied them to the CTS. It won the same award in 2008, but Cadillac didn’t rest on its laurels.

“The 2014 CTS is upgraded in every way,” Caldwell said. “I am talking about performance, luxury, technology and efficiency. Basically, it’s a whole new car where we wiped the slate clean.”

After 10 full days of testing, driving and deliberating, Motor Trend selected the CTS as its Car of the Year for the second time in six years. The sedan ascends into the heart of the midsize luxury market with expanded performance, elevated luxury and sophisticated technology.

In its public announcement, Motor Trend editors stated that the CTS “beat out 21 other vehicles in almost two weeks of testing. So, how’d the Caddy drive away with the award? By excelling in all six of our Car of the Year criteria: Advancement in Design, Engineering Excellence, Efficiency, Safety, Value, and Performance of Intended Function.”

Since the first Motor Trend Car of the Year was awarded to the Cadillac brand in 1949, Cadillac has won the title three additional times – for the full brand again in 1952, with the 1992 Seville Touring Sedan, and with the secondgeneration CTS sedan in 2008.