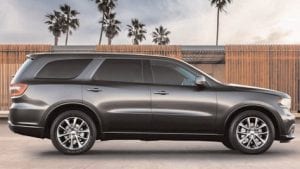 Dodge had some big news at the recent New York Auto Show – the introduction of the 2014 Durango.

When Dodge reintroduced the Durango in 2011, it earned accolades from customers and critics alike. The PBS show, “Motor Week,” for example, gave it the Drivers’ Choice Award for Best Large Utility.

“When the Durango was first launched in 1998, it represented a breakthrough in power, size and style,” said Reid Bigland, president and CEO – Dodge Brand. “Now for 2014, we’re upping the ante by making it our most technologically advanced, fuelefficient and dramatically styled Durango ever. With countless class-exclusive features and best-in-class attributes, the new 2014 Durango represents the ultimate nocompromise full-size SUV.”

With its standard three rows of seats and interior seating flexibility, Durango, say Dodge officials, appeals to shoppers looking for a full-size crossover.