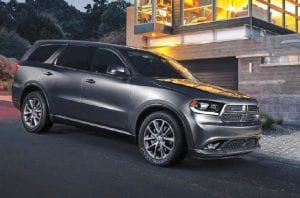 The 2014 Dodge Durango will start arriving in dealer showrooms at the end of the third quarter with a starting U.S. Manufacturer’s Suggested Retail Price (MSRP) of $29,795, excluding destination charge.

Durango also maintains the same starting price as the 2013 model, while delivering more than $3,500 in added content, Hespen said.

The new 2014 Dodge Durango competes in the fastest-growing segments in the U.S. auto industry – the full-size SUV and crossover segments, which combined are up nearly 50 percent since 2009.

“Dodge Durango is on a tremendous run, with nine months of consecutive growth,” said Tim Kuniskis, president and CEO – Dodge Brand. “The new 2014 Durango builds on that momentum, raising the bar for performance, technology and style.”