2014 graduates inducted in the CAHS Academic Hall of Fame 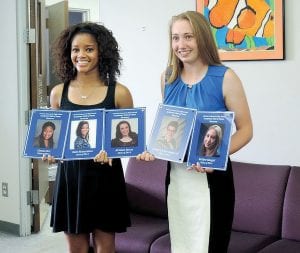 Rani Richardson and Katlyn Koegel (left to right) display their Academic Hall of Fame induction plaques along with those of their classmates who could not attend a special recognition held last week during the school board meeting.

FLINT TWP. — Five recent graduates have been inducted into the Carman-Ainsworth Academic Hall of Fame.

A committee established those standards a few years ago after a lengthy process that included studying similar programs at other districts in and out of the county. The standard takes into account more than good grades.

“It does takes some explaining to parents each year how their children don’t get inducted when they think they should, because they are a 4.0 student,” Mattar said.

ACT scores, and high Advanced Placement test scores and among criteria included, said Superintendent Steve Tunnicliff. That is why inductees cannot be announced during the annual Honors Program before graduation because the ACT scores have not been reported.

“This group is as good as it gets,” he said.

Koegel and Richardson were present to accept their induction plaques that will be permanently displayed on a designated wall in the high school office, Mattar said.

Mothers of Orr and Van Duyne accepted the plaques on behalf of their children, who were out of town,

“We are thrilled to put them up on our walls,’’ Mattar told parents and family members at the induction presentation. “They are going to be doing great things in the future.”