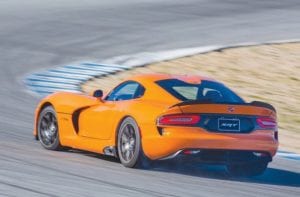 The street-legal SRT Viper TA is specifically built for the performance enthusiast drivers who like to exercise their machines at the more than 150 road-race courses around North America, said Reid.

Based on the SRT model, the lightest Viper in the lineup, the TA Special Edition Package, said Reid, builds upon the vehicle’s ultra-low center of gravity, 50/50 weight distribution and largest contact patch in the production car world.

“The new 2014 SRT Viper TA is engineered for the serious performance enthusiast who needs a car that can be driven daily, yet has mind-boggling limits on a road course that would rival many track-only cars,” said Ralph Gilles, president – SRT Brand.

“As one of the best-handling and fastest supercars available on the market today, the TA enables our customers to take their passion for high-performance driving to the next level. The SRT engineering team set out to create a world-class supercar that has few competitors on the track or the road at any price.”

Under the hood of the 2014 SRT Viper TA is the handcrafted, allaluminum 8.4-liter, midfront V10 overheadvalve engine. Performance ratings are 640 horsepower and 600 lb.-ft. of torque – the most torque of any naturally aspirated sports-car engine in the world, Reid said.