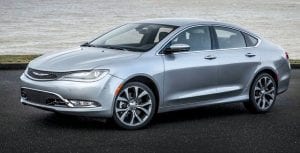 The 2015 Chrysler 200 will arrive in dealer showrooms this June.

As one of the most talked-about debuts of the North American International Auto Show in January, Chrysler’s upcoming June showroom introduction of the 2015 Chrysler 200 is drawing the anticipation of midsize car buyers.

The 2015 Chrysler 200 is the industry’s first midsize sedan with a standard nine-speed automatic transmission, which enables expected highway fuel economy ratings of 35 miles per gallon, according to Chrysler. 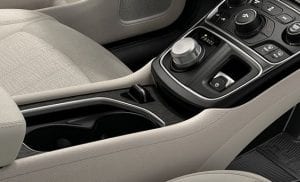 A design for the center console, made possible by full electronic gear shifting with rotary shift knob, is “beautiful as well as functional,” Graham said. The rotary-dial electronic shifting enables a unique pass-through storage feature that the driver and front seat passenger can both access.

“This is a segment first,” Graham said.

The center console features sliding cup holders, allowing drivers and passengers to use the space in a way that best fits their needs, said Graham.

The 200 will be built at the Sterling Heights Assembly Plant (SHAP) facility and will use World Class Manufacturing principles and a new, updated assembly line.

Dealers will begin taking orders for the 2015 Chrysler 200 next month.