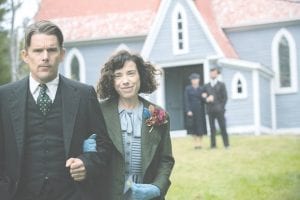 Love in the air and on-screen in September

FLINT — When the 2017- 018 Friends of Modern Art (FOMA) Film Series opens on Friday, September 8, romances of all kinds – old, new, fractured, life-affirming – will be on screen throughout the month. The season, which runs from September 2017 through June 2018, brings quality film to the greater Flint community through the support of the Friends of Modern Art and the discerning eye of FIA Associate Curator of Film Ed Bradley.

This year, updated digital projection, along with a stateof the-art sound system, will enhance the quality of the movie-going experience in the 330-seat FIA Theater, which is home to the film series. Attendance for FIA films has steadily increased over the past seven seasons, with more than 10,000 attendees yearly.

“As more Flint-area residents learn about our program, they can see what a real gem the FOMA series is,” said Bradley. “People use the films as an entry point for everything else the FIA has to offer.” Bradley, the former film critic of The Flint Journal, teaches film appreciation classes at the FIA Art School, and the museum features video artists in its Fleckenstein Video Gallery throughout the year, but the backbone of the museum’s film program in the slate that FOMA has sponsored for more than 25 years.

The season begins with The Lovers, a romantic comedy showing September 8-10. Debra Winger and Tracy Letts star as a long-married couple whose emotionless relationship is boosted by an impulsive spark between them that allows the middle-aged twosome to “cheat” on their respective lovers.

The following weekend, September 15-17, Paris Can Wait offers viewers the first dramatic comedy from Eleanor Coppola, wife of Francis Ford Coppola, whose documentary Hearts of Darkness charted the making of the Oscarwinning Apocalypse Now. Diane Lane stars as the neglected spouse of film producer Alec Baldwin in a film in which the scenery and food are as lush as the performances.

Slated for September 22-24, Maudie is based on a true, unlikely romance between a Nova Scotian (Ethan Hawke) and a fragile folk artist (Sally Hawkins).

Rounding out September is A Quiet Passion from director Terrence Davis, who helmed Summer Song, a film shown in the 2016- 2017 FOMA season. Starring Cynthia Nixon and Keith Carradine, this drama follows the American poet Emily Dickenson’s enigmatic existence from childhood to adulthood.

FOMA films are shown Friday and Saturday at 7:30 p.m. and on Sunday at 2 p.m. in the FIA Theater inside the Flint Institute of Arts, 1120 East Kearsley Street, Flint. Tickets are $6 for nonmembers, $5 for FIA members, and $4 for FOMA members. For more information, please visit flintarts.org or call 810.234.1695.

The Flint Institute of Arts is Michigan’s second largest art museum and one of the largest museum art schools in the nation. The FIA’s mission is to advance the understanding and appreciation of art for all through collections, exhibitions, and educational programs. The FIA is located at 1120 East Kearsley Street in the Flint Cultural Center. The museum is open Mon–Fri 12 p.m. – 5 p.m.; Sat 10 a.m. – 5 p.m. and Sun 1 p.m. – 5 p.m. Admission to the FIA is free to members and children under 12; Adults are $7; Senior Citizens and Students with I.D. are $5. Saturdays are free thanks to Huntington Bank. For more information, please call 810.234.1695 or visit www.flintarts.org. – L.R.