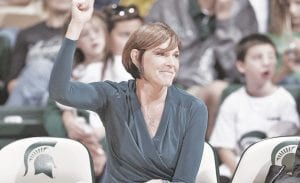 MSU head volleyball coach Cathy George is among the three newest appointees to the American Volleyball Coaches Association (AVCA) Board of Directors. George will speak at the MHSAA Women In Leadership Conference on Feb. 5.

EAST LANSING — The first, largest and longest-running program of its type in the country, the Michigan High School Athletic Association’s Women In Sports Leadership Conference will take place Feb. 4-5 at the Crowne Plaza Lansing West.

The 23rd edition of the conference again will feature three keynote speakers and a variety of workshops. The program annually attracts upwards of 500 participants, most of them high school female student-athletes. High school students, coaches and administrators are invited to find registration information on the MHSAA Website at www.mhsaa.com by clicking the Education tab at the top of the home page and then the Women In Sports Leadership tab in the left menu under Training & Education.

Cost is $50 for students and $60 for adults, not including lodging for those intending to stay overnight in Lansing. A registration form for lodging also is available on the MHSAA Website.

The theme for this WISL Conference is “LEAD: Embrace the Challenge” – and the opening address will be delivered by U.S. national team volleyball setter Alisha Glass, who starred at Leland High School and led the Comets to the Class D championship as a senior in 2006. She continues to hold four MHSAA records including for career kills (3,584) and aces (937) and went on to start all four seasons as a setter at Penn State, leading the Nittany Lions to three straight NCAA Division I championships. Glass then led the U.S. national team to the 2014 world championship and the 2016 Olympic bronze medal. She will speak on 21st century leadership responsibilities and daily leadership opportunities student athletes may encounter.

The winningest coach in NCAA softball history, University of Michigan’s Carol Hutchins, will speak on the importance of leadership and continually sharpening those skills at the WISL Banquet during the evening of Feb. 4. Hutchins, a graduate of Lansing Everett High School and Michigan State University, has built a 1,527-491-5 record over 33 seasons and also is the winningest coach in Michigan athletic department history. Hutchins joined the Wolverines staff as an assistant in 1983 and took over the program as head coach in 1985. She led Michigan to the College World Series championship in 2005 and a runner-up finish in 2015. Hutchins played both softball and basketball at Michigan State and helped the Spartans to the 1976 Association of Intercollegiate Athletics for Women national softball championship. She also holds a master’s degree from Indiana University.

Michigan State University women’s volleyball coach Cathy George will challenge participants to “find the leader in you” throughout life during the morning of Feb. 5. George recently completed her 13th season at MSU and 31st overall as a college head coach by guiding the Spartans to the NCAA Elite Eight. Her 256 wins at MSU are the most in program history, and she has a career record of 621-398 – counting also 11 seasons leading Western Michigan University, five at University of Texas-Arlington and two at North Dakota State. Her MSU teams have made the NCAA Tournament seven straight seasons. As an athlete, George was a team captain and three-time all-league selection at Illinois State, helping the Redbirds to three NCAA Tournament appearances.

Workshops offered during the WISL conference include topics on coaching, teaching and learning leadership, sports nutrition and performance, injury prevention, promoting team chemistry and roles and responsibilities of captains. A complete itinerary is available on the MHSAA Website.

The WISL Banquet will include the presentation of this year’s Women In Sports Leadership Award. The winner will be announced later this month.