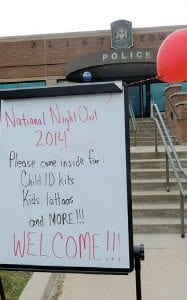 Crime prevention services such as Child ID Kits were offered inside and outside of the police department during its annual National Night Out event Monday evening.

Participants experienced all of those in an Impaired Simulation exercise debuted by McLaren Flint Trauma Services during National Night Out on Monday evening at the township police station.

McLaren’s exhibit invited adults and children to test their ability to drive under impaired conditions. While wearing different types of impairment goggles, they were timed as the drove a pedal cart through an obstacle course of orange cones The goggles simulated what you see during different levels of drunkenness and also after smoking marijuana or being sleep deprived. Goggles were also worn during typical drug sobriety tests such as standing on one leg. 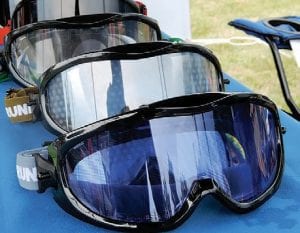 Designed to educate people about the dangers of driving while impaired, it was the first time McLaren has used the simulation publicly, a spokesperson said. The equipment was developed and provided by Drunk Busters of America. More information about the service is provided on its website at www.drunkbusters.com

Among other NNO exhibitors was a booth to promote the township’s public safety millage on the November ballot.

Inside the police station, parents registered their children for an EZ Child ID Program kit, that included fingerprints and a photo which police use to help find missing children.

Members from several Flint Township Neighborhood Watch groups worked with the police department and Natalie Nagy from Target Corporation to present a variety of NNO activities. Including a bounce house for children. 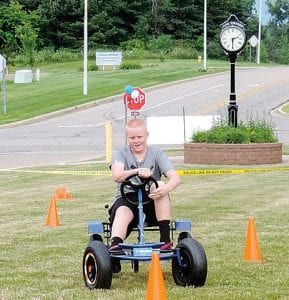 Tuesday marked the 31st annual National Night Out. Sponsored by the National Association of Town Watch (NATW) the nationwide event partners with more than 10,000 communities from all 50 states, U.S. territories, Canadian cities and military bases around the world.

It is designed to heighten crime and drug prevention awareness, generate support and participation in local anticrime efforts, strengthen neighborhood spirit and promote police-community partnerships. Collectively, these efforts help send a message to criminals that neighborhoods are organized and fighting back.