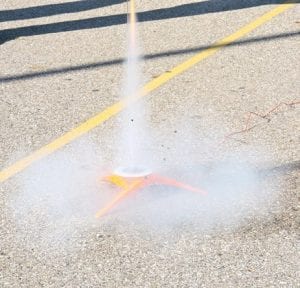 After the usual countdown, CAMS students blasted off several model rockets during a hands-on STEM workshop last week offered by Stemnetics. Then all eyes turned skywards to watch how high each one soared.

FLINT TWP. — Who knows? A future career at NASA might have launched last week alongside model rockets blasted 200 feet into the sky by students at Carman-Ainsworth Middle School.

About 30 students attended a free rocket-building workshop offered by Stemnetics, a Grand Blanc-based educational company with a mission to promote interest in science, technology, engineering and math (STEM) careers.

“The mission is to build 21st century skills,” said Seun Phillips, Stemnetics executive director, who attended the University of Michigan and has a background in electrical engineering.

Phillips started doing STEM-related programs five years ago in his native Chicago and moved the idea to Michigan where he now resides in Grand Blanc.

The rocket-building workshop at CAMS was the first of what Phillips hopes will be a series of STEM-based workshops. The first one was free but a proposed four-week program slated to begin October 7 is fee-based. It will offer fun projects such as building a mousetrap car, a battery-powered flashlight and robots, Phillips said. 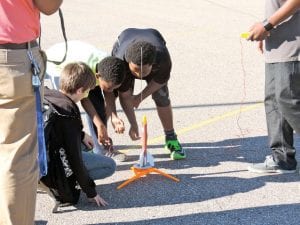 “We want our kids to be able to be creative problem-solvers,’’ he said. That includes group collaboration, planning, designing and building while learning about various STEM fields.

Phillips also offers Stemnetics professional development for teachers and workshops for parents to improve their understanding of STEM projects and to boost learning early on in students’ career paths.

CAMS does not currently has a robotics program but is working on finding a sponsor, he said.

Interested students from all grade levels signed up for the after-school rocket building workshop, he said, noting a high level of participation. 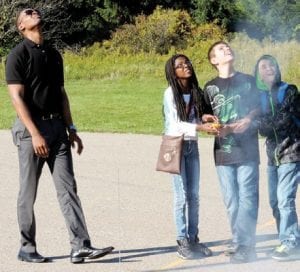 Phillips and crew guided the students through building model rockets made from cardboard tubing, plastic and ignition parts.

After passing inspection, the students took their rockets outside, several feet away from the building to launch them. Some soared as high as 300 feet before wafting back to earth to be retrieved as souvenirs by the students.

In addition to concepts such as gravity and aerodynamics, students also learn about the impact of rockets on the environment.

Phillips has partnered with the Genesee Conservation District to combine science and environmental learning.

“We put the two together because every factory and any place that builds things has a department of environmental quality to make sure things are getting made correctly without hurting the environment or people,’’ said Jef Johnson, of the Genesee Conservation District, who taught the students about storm water runoff, pollution, environmental water quality and the impact of rockets on the environment.