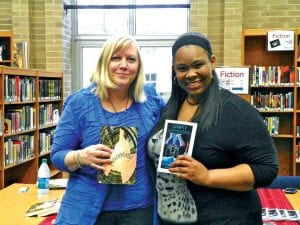 Susan Sage and Jessyca Matthews, staff at CAHS, with copies of their books presented at book signing event.

Mattern was unable to attend at the last minute due to illness but Matthews and Sage were on hand to read excerpts from their books, take questions from the audience and sign copies of their book.

Matthews is the newest author. Her book of poetry, “Simply A Collection of Poetry” was published in early March.

Matthews teaches 11th- and 12-grade English and also is the varsity girl’s soccer coach. She’s worked at CAHS for 13 years.

She is also a CAHS graduate who has been writing poetry since the fifth grade but her big break to becoming a published author came last year as the result of winning a poetry contest. 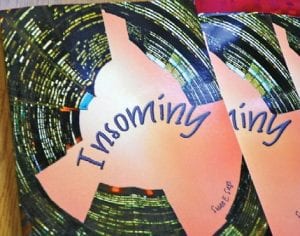 She was the 2012 MANA Passion for Poetry Contest Winner. Ann Arborbased MarketingNewAuthors (MANA) is a publishing, marketing and distribution service for authors. It is not a vanity press but a selective publisher that filters accepted books through a review board, according to information published on its website at www.marketingnewauthors.com/index.html

“I got lucky and won a cash prize,” said Matthews whose winnings included free publication of her book and a twoyear business contract with MANA.

Matthews said she learned about the contest last June and spent the next four months writing about 30 poems to meet the October deadline. Five months later she became a published author.

Copes of her book can be purchased on the MANA website (look under the list of new publications) or at Pages bookstore on Second Street in downtown Flint, Matthews said.

Sage has been an English tutor at CAHS for two years and before that taught English in Adult Education classes for seven years at Flushing High School. 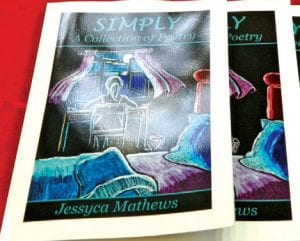 “Insominy,” her first novel was published in 2010 but she had published several poems and short stories previously, she said.

She described “Insominy,” as an urban fantasy without the werewolves.

“It was just an idea that I had that I could not get out of my mind and it turned into a book when I thought it was just going to be a short story,” she said.

It is about a young woman discontented with living in a small town who begins visiting a friend who lives in a place that does not exist on any map where all the residents are artists and insomniacs (hence the book’s title). The book should appeal to readers who enjoy reading about magical worlds, Sage said.

Published by Virtual Bookworms, a Texas-based print-on-demand self-publishing company, Sage’s book can be purchased through amazon.com and barnesandnoble.com.

Faith McBride, Carman-Ainsworth media specialist, who organized last week’s event, said the idea formed after Matthews’ book was published adding to the thrill of already having two other authors on staff.

“We just wanted to celebrate their accomplishments,” McBride said. “We are just so proud of them.”

She shared information about Mattern’s books in her absence.

She has written two children’s books, “Papa, Why Does the Wind Blow?” and “Welcome Little Leo,” McBride said. She also has a young adult book titled “All About Jane,” due out in May.