3 Cavs commit to play in college

Jasia Caldwell poses for a portrait after signing her letter of intent. Photos provided

FLINT – Three Carman-Ainsworth athletes made their commitment to play at the collegiate level at last Wednesday’s press conference at Carman-Ainsworth High. The Cavaliers have a long tradition of moving kids on to the next level.

“I picked Eastern because they were truthful with me and told me everything I needed to hear,” said Barron. “I am very excited about running at Eastern. Can’t wait to start training there.”

The Business Marketing major believes his biggest challenge will be consistently running fast times. In football, he was also All-Saginaw Valley League at corner and led the league in catches and yards.

“(I’d like to thank) my family; all of them support me, but mainly my dad,” added Barron.

Jasia Caldwell will be headed to Michigan-Dearborn to play basketball. She chose UMD over Mott Community College and Mount Mary University in Wisconsin. 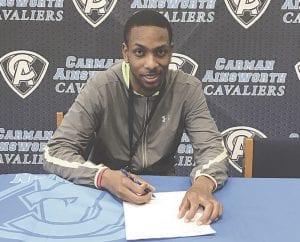 Trent Barron looks up as he signs his national letter of intent.

“It was the best fit for me with a wonderful community,” said Caldwell. “My biggest challenge would be time management with balancing school and basketball. (I’m) nervous about washing my own clothes.”

Caldwell will major in biology. At Carman-Ainsworth, she is 2019 senior class president and has been a varsity soccer captain for the past three seasons.

“Starting positions are always earned and I have to work hard to earn mine,” added Caldwell. “I will be coming into the team as a center. (I’d like to thank) my mother. She hasn’t missed a game since I have started playing. Also, I really want to thank my father and my grandmother for their moral and financial support.” 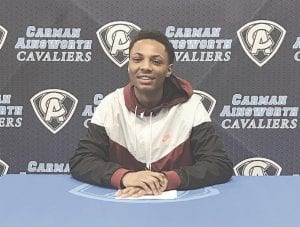 Donnaal Conway poses as he signs his national letter of intent.

“The coach’s plan with me as a player, student and person (is why I chose OCC),” said Conway. “Also, a few family sit downs. (I’m) nervous about moving away from my family, but also excited about it and also excited about hoop season and college itself.

“Responsibility (will be a challenge); I’m not going to have people waking me up for school nor telling me I have to go. Nothing is given, so I’m going to have to earn my starting position.”

He plans to major in either business or sports management.

“(I’d like to thank) my family and friends and former AAU and school ball coaches,” concluded Conway.