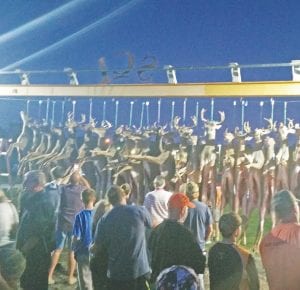 The crowd gathers around the youth buck pole at Madden’s Lounge Sunday evening.

DAVISON – It was a warm weekend for hunting with the temperatures hovering around 80 by afternoon, but 31 deer were entered into the annual Youth Buck pole as part of the yearly Liberty Hunt that allows youth and disabled hunters to hunt white tailed deer. The Flint River Chapter of Safari Club International is the main sponsor of the pole at Madden’s Lounge in Davison.