3rd Annual Corvette Reunion at Back to the Bricks 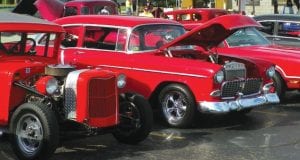 TUNING UP — Packard, Bel Air, Studebaker, Model T’, Mustang and many more iconic cars from bygone eras cruised into Flint Township last week for the second annual Back to the Bricks Tune-up party. Like its namesake, the big car show taking place in downtown Flint all this week, the tune-up events were held in five locations around the county to rev up classic car buffs sporting all makes and models of souped up, custom-colored vehicles. Some of them even had “for sale’ signs on them. The party started in the parking lot at Genesee Valley Center mall at 1 p.m. and cruised down the road to Duke’s Car and stereo at 4 p.m. where the after-work hours and cooler weather brought out bigger crowds and more cars that spilled over into the back parking lot in front of the former Circuit City store.

One place will be at the 3rd annual Corvette Reunion, rolling into Flint this weekend for the Back to the Bricks car show in downtown Flint and its own festivities.

The reunion was the brainchild of Anthony Bowling, a Flint Township resident and TrendSettas president, who spearheaded the first reunion in 2010. About 200 Corvette owners showed up that first year, according to an event spokesperson.

This weekend the group hopes to host about 1,000 Corvettes at the Corvette Reunion on the Bricks, from 10 a.m. to 4 p.m. Afterwards, trophies will be awarded to the Top 50 cars and invitations handed out for the Motor City Concours, a premier event show for the “best of the best Corvettes hosted Sept. 22 by Les Stanford Chevrolet/Cadillac in Dearborn. 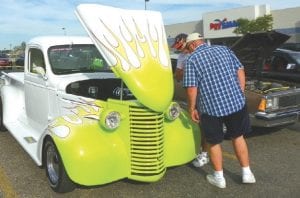 Flint reunion fun begins from 1-5 p.m. Friday with a welcoming Hospitality Suite at America’s Best Value Inn & Suites, 6075 Hill 23 Drive, in Mundy Twp. At 7 p.m. the celebration moves to the Brick Street Bar & Grill. 1223 E Grand Blanc Road, for a meet and greet, then winds up with a Corvette Night at about 8:45 p.m. at the Encore Sports Bar & Grill on Beecher Road in Flint Township, according to information posted on TrendSettas web site.

Reunion members plan to be up and out by 6 a.m. Saturday morning to obtain premium show car parking at the Back to the Bricks event. The car show opening ceremony is at 10 a.m.

At 7:30 p.m. members of TrendSettas will lead reunion participants back to Encore’s for an after-party.