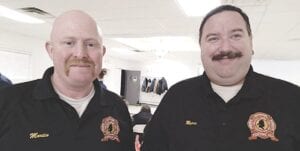 CLAYTON TWP. — Ryan Murphy was beyond happy when he heard his name announced as the first-place winner of the Five Alarm Chili Cookoff sponsored by the Swartz Creek Area Firefighters Inc.

“I was so giddy,” said Murphy. “I was like a child inside, because I’m more of a quiet person. I was very excited, astonished.”

“I’ve done the competition the four years, and took third place the first year,” said Murphy. “So, I just kind of evolved it (the recipe) and evolved it.”

He asked co-workers to sample and critique his concoction, and then he threw it all together and slow-cooked it. 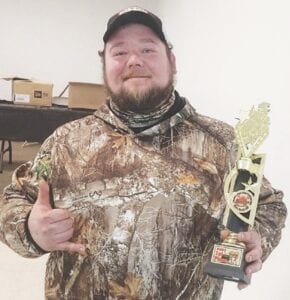 “I think it’s more in the method than the ingredients,” Murphy said. “I think the way I prepared the vegetables, along with the ground beef in bacon grease, is what brought out the full flavor.

“This is probably the 10th pot of chili I’ve ever cooked in my life, so I’m still kind of new at it and trying different things.”

Firefighter Dave Myers and Lt. Scott Martin organized the cookoff. With the COVID-19 safety protocols still in effect, they weren’t sure if they could pull it off, and they only had about six weeks to put it all together once they made the decision to give it a go.

Myers said the event went well, despite the restrictions. The Swartz Creek Area Firefighters Association – a non-profit group of firefighters separate from the fire department – made a little more than $1,500 which will go toward two scholarships for graduating Swartz Creek area seniors. 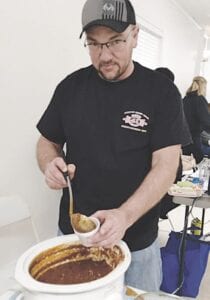 Steve Kinney was one of 14 competitors who participated in this year’s event. Photo by Lania Rocha

The association has awarded scholarships since 2016. Applications will be available through the high school later this year. The amount is as yet undetermined.