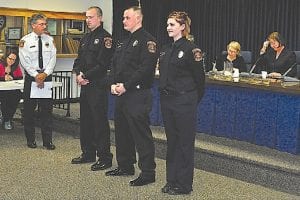 FLINT TWP. — Five of eight on-call firefighters brought on board last fall have made the grade and were approved by the township board on Monday night for employment offers.

Three of the five new on-call firefighters were presented to the board by Fire Chief John Ringwelski. They are Megan Dean, Aaron Graham and Blake Selvig. Two other new hires who were unable to attend the meeting are Justin Snider and David Sanders, Ringwelski said.

The recruits were brought on board on probationary status last October, in response to growing concerns about resignations and a dwindling on-call fire staff. The search for additional on-call fire fighters is ongoing.

The new hires have completed the Fire Fighters I and II classes and have been certified by the State of Michigan Firefighters Training Course, Ringwelski said. They are now eligible for the next level pay grade, he said.

Before achieving probationary status, the new recruits had to complete several preliminary requirements including passing a background check and attitude test, medical, fitness and drug testing.

Most of the township’s firefighting crew serve on an on-call basis, called in as needed. The township employs 11 full-time fire staff including the chief and assistant fire chief.

The department most recently lost one longtime on-call firefighter with the death of Randy Rice in March.

Township Board Trustee Frank Kasle commented during the meeting that two resignations are pending from oncall firefighters who have a combined 45-50 years of service. He asked for a meeting with the fire chief to discuss retention.

“I have been concerned about the loss of many of our on-call fire men and women,’’ he said, alluding to morale problems that have cropped up regularly in the past few years.

Applications for on-call positions can be found on the township’s web site at www.flinttownship.org or obtained in person at Fire Station #1, 5331 Reuben St.