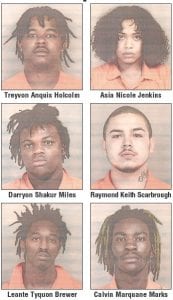 GAINES TWP. — Genesee County Prosecutor David Leyton has charged six Flint residents in the shooting death of a 49-year-old man at a home in Gaines Township.

David Lee Holmes died of gunshot wounds to the head and torso, Leyton said. The shooting occurred around 7:15 p.m. Monday, April 20, in the 11000 block of Hill Road near Nichols Road.

Witnesses earlier had observed a vehicle leaving the scene and were able to provide police with a description and license plate number which were relayed to other police officers.

Moments later, a Metro Police Authority officer spotted the vehicle and with back-up from the state police, a traffic stop was made on Miller Road at Interstate 69 in Swartz Creek.

Six passengers in the vehicle were taken into custody and all six stand charged in connection to the incident.

Leante Tyquon Brewer, 18, is charged with felon in possession of a firearm, carrying a concealed weapon and tampering with evidence. Brewer remains in custody on a $30,000 bond.

Calvin Marquane Marks, 22, is charged with accessory after the fact to a felony, felony firearm and carrying a concealed weapon. Marks received a $15,000 bond. He remains jailed.

“According to the police investigation, the homicide occurred after members of the group got into an argument and a fight with the victim inside the house and guns were drawn and shots fired,” said Leyton.

State police have said the dispute was over money.

The house was the scene of a drug raid four weeks ago, authorities have said.

The six defendants will be arraigned in 67th District Court.