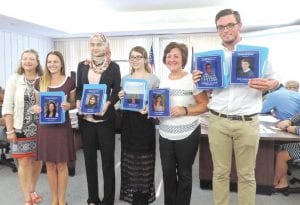 CA board president Patrice Hatcher (left) and CAHS principal Debbie Davis (second from right) joined four of the six students from the Class of 2016 who are being inducted into the Academic Hall of Fame.

FLINT TWP. —As a final act of high achievement, six members of the Carman- Ainsworth Class of 2016 were inducted into the Academic Hall of Fame last week. Four of the six attended the school board meeting last week to accept the plaques that will be added to a growing gallery of high achievers displayed on a designated wall at the high school.

The Academic Hall of Fame was conceived several years ago as a counterpoint to the established Athletic Hall of Fame recognizing outstanding athletes.

“I am delighted to be here to get a chance to see the people I have been bragging about all summer,” said Superintendent Eddie Kindle.

“I want you to know that we admire your accomplishments,” he said. “You have inspired quite a few teachers as you have walked the halls of Carman- Ainsworth. Now you are leaving this runway and are going to go off and do even bigger and better things. Remember us when you go out to change the world because each one of you has the ability to do that.”

“These students represent the best of the best,’’ said CAHS Principal Debbie Davis, who introduced them at the board meeting. Qualifications for the Hall of Fame included g.p.a., ACT scores and Advanced Placement (AP) courses and test scores and/or dual enrollment course grades.

Rida Khan* was the president of the National Honor Society and graduated at the top of her class with a perfect 4.0 g.p.a. She will be attending the University of Michigan in Ann Arbor to study medicine.

Noah Vanderhyde served as a two-year student member of the Carman-Ainsworth Board of Education a band member and active in several leadership roles.

William Norris was active in band, the National Honor Society and on the golf team. He received a full tuition scholarship to University of Michigan- Ann Arbor where he plans to study Business Administration.

Dorothy Dollinger, who finished in the Top Ten with a 3.992 g.p.a. was active in swim and tennis. Danielle L. Heit graduated with high honors among the category of 2016 graduates who earned grade point averages of 3.8-4.0