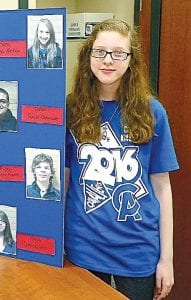 Dahlia Kassel, 14, has written and staged her first play, which was performed at Carman- Ainsworth Middle School on May 17.

FLINT TWP. — Following in the footsteps of famous female playwrights like Lorraine Hansberry, Eve Ensler and Julia Cho, an eighth-grader at Carman- Ainsworth Middle School has written and staged her first play.

“Second Chance,” written by Dahlia Kassel, 14, was presented May 17 in the middle school auditorium.

“The thing I am most proud of is that it was an all-kid production,’’ said Dahlia, who wrote the play on a snow day off from school, after being inspired by a play she saw at the Flint Youth Theater. “Amber Waves’’ was about a farm family struggling through a year of hardship.

Dahlia admired the style of the play which had a small cast of characters.

“It touched my heart. It felt like the people were talking to you,” Dahlia said.,

Despite having no experience living on a farm, Dahlia enlivened her “boring” snow day by dashing off her play about a farm girl who moves to the big city but is forced to move back home when she loses her job. By the time she’s offered her old job back, she’s torn by whether to stay on the farm or move back to the city.

All characters were played by CAMS drama students and a crew of three stage technicians included Dahlia’s twin brother David, who helped run lights and sound.

Dahlia’s theater background dates back to fourth grade at Randels Elementary when a teacher Ms. Dillard cast her as the lead in two school plays.

“Without her, I don’t think I would have been in theater,’’ Dahlia said. She has since appeared in 16 productions including CAMS productions and summer work with the Swartz Creek Center Stage.

Most recently, she played the lead role in CAMS production of “Honk! Jr,’’ and adaptation of Hans Christian Andersen’s “The Ugly Duckling.”

Dahlia enjoys acting but wants to be a director when she grows up. “Second Chance’’ has given her a taste of what to expect.

The stage production came about when CAMS theater teacher Sandy Cawood heard Dahlia telling after-school drama teacher Doug Dixon about the play she had written. Cawood read a copy and decided to produce it.

“I read her work I was impressed and immediately thought she must have the opportunity to see her work come to life.” Cawood said. “We talked and she was ready to move forward with auditions, casting and directing.”

Dahlia worked tirelessly on every facet of the production including set design, publicity and wardrobe.

“She is deserving of many accolades for her accomplishment is far beyond her years,” Cawood said.

Dahlia also received help from Dixon, a seasoned director, who helped her with challenges including choosing a cast and scheduling rehearsals limited to 20-minutes at a time because that was available during the school day.

Dahlia also credits support from dad Michael, a history professor and published author, and mom Karen who helped her shop for props and provided insight on rural life which helped to authenticate the play’s content.

Dahlia said she is the first CAMS student to have a play produced.

Having seen it staged, her next step is to tweak it a bit, then with Dixon’s assistance she would like to get it published by a theater company that specializes in children’s plays.