A Bug’s World coming to the Sloan Museum 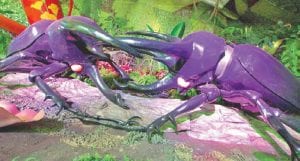 FLINT— Giant bugs are crawling into Sloan Museum from May 21-Sept. 4. Visitors will trade sizes with an insect to find giant animatronic bugs looming large in this interactive exhibit. Sponsored by Lush Lawn and Safari Tree, this unique exhibit gives visitors a brand new perspective on a bug’s world, as they encounter insects up close and larger than life.

The enormous insects on display are a spectacular blend of art and science. They are both breathtaking in form and movement, as well as scientifically accurate down to the last detail. A Bug’s World allows the visitor a clear observation of the behaviors and adaptations that have helped insects survive through the ages.

Known locally for the dinosaur exhibits that have visited Sloan Museum, the insects are created by the Kokoro Company.

These creatures move in life-like fashion in natural settings, including scenic backgrounds, giant leaves and grass, authentic insect sounds, and low dramatic lighting. Visitors will walk through a giant microscope lens, seem to shrink, and then encounter five gigantic robotic insects up to 200 times life size!

Rhinoceros Beetle: Two male horned beetles, members of the scarab beetle family will battle each other in horned combat. From the order Coleoptera, meaning “sheath wing,” these 11-footlong beetles have two armor like front wings that cover and protect the transparent wings used for flying.

Chinese Praying Mantis: This 19-foot-long leaf-like insect may look gentle (its name comes from its appearance of praying), but it’s actually one of the most intimidating hunters. Large eyes, strong legs and powerful jaws enable the mantis to capture and eat other insects. They even eat each other: females recycle males after mating! This robot will demonstrate its most threatening behavior.

Swallowtail Butterfly Caterpillar: This 15-foot-long wiggler represents one stage of the seemingly-magical process of metamorphosis. Caterpillars hatch from eggs, and are the larval stage of the process. Growing in five steps, called instars, by molting or shedding its skin as it gets bigger, caterpillars finally attach to a leaf and become a pupa. A chrysalis forms around it and provides protection for the several months needed to develop adult legs, mouthparts and wings. Finally, a beautiful butterfly emerges from the cocoon and the process begins again!

Desert Locust: These grasshoppers travel in swarms, eating crops, grass, trees and anything else in their way. This robot is 12 feet long, and demonstrates the powerful legs that enable this animal to jump phenomenal distances, up to forty times the length of its own body!

Stick Insect: 21½ feet long, this bug demonstrates the art of insect camouflage. Mimicking branches or twigs by imitating their appearance and motion, these strict vegetarians employ this strategy to hide from their predators.