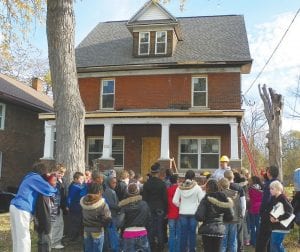 Fifth graders from Randels Elementary in the Carman-Ainsworth School district learn about this Oak Street house being rehabbed by Habitat for Humanity.

FLINT TWP. — Eager to help, the kids grabbed rakes and garbage bags and tackled the leaves in two yards on Stockton Street, as if they were their own.

In a way they are. The students — fifth graders from Randels Elementary — are involved with Youth United, a program of Genesee County Habitat for Humanity which strives to engage youth in its mission of eliminating poverty housing.

Two busloads of students arrived last Tuesday and Wednesday on a field trip to see and learn more about Habitat houses being rehabilitated or built in the Grand Traverse neighborhood west of downtown Flint.

“This is a really old part of the city,’’ said Adam Haffajee, Habitat’s development director, as he stood with the students in front of a house being rehabbed on Oak Street.

Haffajee polled students on what changes they expected to see made to the house and they astutely pointed out the boarded up doors and windows that need to be replaced. 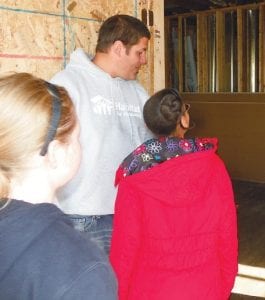 Adam Haffajee, director of development for Genesee County Habitat for Humanity gives students from Randels Elementary a look inside this Oak Street house.

Haffajee told them old bricks needed to fill in a window being closed off hopefully would be obtained from a gym being razed across the street at the old Oak School property. He said the third story of the house would be closed off with insulation. The students were allowed to take a peek through the front door at the gutted interior of the house where work crews were busy putting it back together.

Armed with clipboards and notebooks, the students took notes on Haffajee’s comments to help with stories they will be writing in class about the project. Some took “before” photos and some drew pictures.

Haffajee said the goal is to move a yet-tobe identified family into the house by end of the year and have the students return for a visit early next year.

After the Oak Street tour, Haffajee accompanied the students to nearby Stockton Street to rake leaves at two Habitat houses – one repainted in Habitat’s Brush with Kindness sprucing-up program and one that was the second completely new build by Youth United student volunteers which includes high school and college students who raised half the building costs. That house was completed in early 2010. The next Youth United build will take place in May.

The local youth program is funded by a $4,000 grant from State Farm, which also is an avid national supporter of Youth United, Haffajee said. State Farm has supported the local program for three years, he said.

The first busload of Randels students who visited on Tuesday raked leaves at the Oak Street house because a fire destroyed a Habitat house on Seventh Street a few days before the students were scheduled to visit it, Haffajee said. So the work site for the second group was moved to Stockton Street.

All students will be participating in a competition to raise the most money for Habitat with the prize being an opportunity to come back and help paint the Oak Street house.

Randels students have raised about $8000 for Habitat in the years they have participated in the program. Fundraisers have included canned food drives and a big annual event. It normally takes place in the spring and involves students selling items they have made including birdhouses and greeting cards. The music teacher also organizes a concert in conjunction with the sale, featuring music about people helping each other.

Youth United works with students ages 5 to 25 with the goal of involving them in community work, developing teamwork and leadership skills and fostering an understanding of Habitat’s mission to provide decent housing for the poor. All students participate in fundraising, education and advocacy while those over 16 also help with actual house construction.

Most of the Oak Street rehab work is being done by a crew from Mott Community College Workforce training program, Haffajee said.

Habitat workers have renovated or built more than 24 homes in the Grand Traverse neighborhood in the past four years, he said.