A day to remember those who died, served 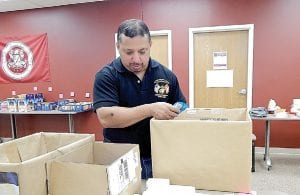 George Botello, a U.S. Marine Corps veteran who served in Iraq, gives back by helping pack care boxes for servicemen and women during a National Day of Service and Remembrance hosted by Davenport University on Sept. 11.

FLINT TWP. — As the nation observed the 12th anniversary of the Sept. 11 terrorist attacks, students, staff and volunteers at Davenport University spent the day in a special recognition to honor service men and women and the victims of Sept. 11.

George Botello of Lapeer, a Davenport student in Health Claims Management, was among military veterans participating in the event.

“I was once on the receiving end of these (care packages) when I was in Iraq,” said Botello, a Marine Corps. veteran who served overseas from 2006-07.

He was among about 50 volunteers who came together on campus from noon to 4 p.m. Wednesday to box care packages. Five of the 50 boxes packed will be mailed overseas, five will be sent to Davenport’s main campus in Grand Rapids for distribution and the remaining 40 will be distributed to homeless and homebound veterans in Genesee County, said Wilma Mitchell, Davenport-Flint campus director. 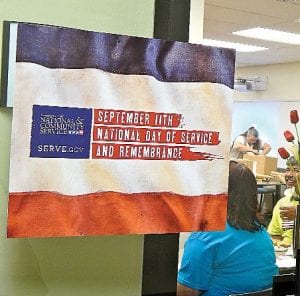 Davenport University hosted a National Day of Service on Sept. 11 by packing care boxes for service men and women.

The Sept. 11 National Day of Service and Remembrance is held annually to honor and remember victims of 9/11. It is a federally recognized observance supported jointly by the Corporation for National and Community Service and the non-profit MyGoodDeed movement which annually organizes the “I Will” campaign on behalf of the 9/11 community.

The Davenport observance began with the National Anthem sung by Laura McGinnis followed by a moment of silence at the flagpole in front of the school fronting Miller Road.

At least 50 volunteers including students spent the rest of the day packing boxes including handwrapping each one in brown paper, decorating it with a message of thanks or encouragement and including a handwritten thank-you note inside.

Boxes were filled with a variety of items ranging from books to toiletries, snack foods to footballs. Some items were donated and some purchased with a a $350 Grant from the Michigan Community Service Commission (MCSC) and Volunteer Centers of Michigan (VCM) Mitchell said. 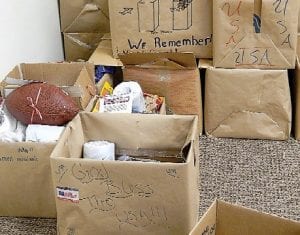 Volunteers at Davenport University hosted a National Day of Service and Remembrance where they hand-wrapped and decorated care packages to be given to service men and women.