A district history lesson surfaces at board meeting 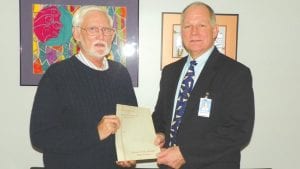 FLINT TWP. — A walk down memory lane was prompted at a recent Carman-Ainsworth School Board meeting by a program booklet from the Dec. 2, 1949 dedication of Robert N. Mandeville High School.

Brought in by Dave Swierpel, director of professional learning & community services, this newest addition to the district’s historical documents archives was donated by Don Nichols of Flint, who found it among construction memorabilia that belonged to his father Francis Nichols. Francis Nichols was a carpenter who worked on numerous Flint-area buildings including most General Motors plants, Grand Blanc High School, and the Flint Journal building.

Don NIchols had two copies of the Mandeville dedication booklet and decided to donate one to Carman- Ainsworth because he wanted it preserved.

“It just seemed to fit with Carman,’’ Nichols said. ”I am the one that hangs on to all the historic stuff and tries to keep a family lineage going.”

Nichols said his dad, who died in the mid-1980s, would take his children around to see the various buildings he worked on but does not remember the Mandeville construction per se because he was only about 9 years old. The Nichols family lived in the Beecher School District.

The well-preserved 32-page document provides a snapshot of post World War II years when Flint was growing and business was booming. It has pages of ads from local and Detroit-area businesses such as Reagan’s Garage, providers of school bus maintenance and gasoline and LaVanway Cleaners and Dyers, Mandeville’s official uniforms cleaners, both located on Fenton Road.

There’s also an ad from Karl B. Foster, the general contractor for the building, who was Francis NIchols’ employer. That ad boasts the speed of construction from the Jan. 24 groundbreaking to the Sept. 2 school opening, which is also described in detail inside the booklet.

There are photographs of the construction phases, of the faculty and of the finished buildings and amenities.

Depictions include the commercial department where students learned typing, shorthand, bookkeeping and other office skills; the home economics department which included an apartment furnished courtesy of Smith-Bridgman department store in downtown Flint where girls practiced housekeeping, learned to do laundry, cook, sew, child care and other skills offered In “the best Homemaking Department in the State.”

An open letter to the parents and taxpayers of Flint, Mundy and Burton townships from superintendent Emma Carroll described the amenities of the school and expressed her satisfaction in seeing the end of overcrowded classrooms forcing students to attend classes part-time.

“Now we have room to keep each child a full day, treat him as an individual and offer improved academic instruction,’’ she wrote.

Improvements in the music department meant that students would be able to participate in state competitions and the addition of a new gym meant the basketball team would no longer have to practice outdoors or “travel across town to a rented gym.’’

There’ s a photo of the district’s fleet of six Chevrolet school buses and a cafeteria with seating for 150, equipped with automatic dishwashers.

The booklet contains the dedication program and a brief biography of the school’s namesake who was one of 16 students in the original Carman School graduating class of 1936. He joined the Air Force and died from injuries sustained in World War Ii combat.

Mandeville high school became a junior high school in 1961 and closed in 1986 with the consolidation of local districts. The property was purchased by Baker College in 1988.

Swierpel said the dedication booklet will be kept in the school’s archives along with other historical artifacts donated over the years. Those include the first district newspaper from 1961, aerial photos of several buildings under construction in the 1950s, class pictures from the 50s, a 1938 Carman yearbook, photographs of school boards, and a Carman class graduation picture from 1946.