A life in the game

Steve Johnson has seen it all in 39 years of officiating 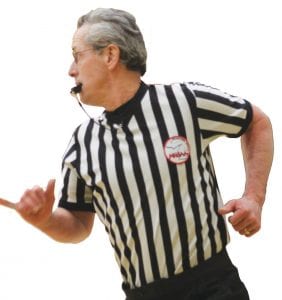 Sit down with any referee and they could tell you stories about their profession until the next millennium.

Talk with Steve Johnson and he could spin tales until the Lions win a Super Bowl.

Johnson, a Carman High graduate and current Davison resident, has officiated high school football, basketball and baseball for 39 years and has a memory full of good stories.

Like the time he called his own son out on strikes in a freshman game.

“He didn’t talk to me for two weeks,” Johnson said with a laugh. “He turned around and looked at me as he walked away and I just said, ‘Next time, swing the bat.’”

That’s a good one, because it says a lot about Johnson’s integrity.

It’s also similar to the way he got into officiating. Carman athletic director Pete Fornari had been urging him to do so, but Johnson had an idea he could make a career out of baseball. A .300 hitter who could play several positions, especially catcher, Johnson was picked for a Flint all-star team that went up to Saginaw for a Connie Mack tournament.

The first pitcher he faced there was future major-leaguer Lary Sorensen, who was already getting drafted at the time.

“He threw me three curveballs that I just watched go by,” Johnson said. “That told me I wasn’t going anywhere in baseball. I said if I want to stay in ball, I’m getting into reffing.”

Johnson started officiating at 17, right out of high school, and has become one of the top officials in Michigan. He has refereed or umpired 11 state championship games in three sports – four in football, four in boys’ basketball, two in girls’ basketball and one in baseball.

He reffed the only sold-out game in the history of the state basketball finals – the 2004 Class B semifinal between Detroit Renaissance and a Drew Neitzel-led Wyoming Park team at the Breslin Center.

“Great game; no problems,” he said.

Johnson seldom has problems with players or coaches, partly because he’s good, but also because he knows how to defuse a situation and quickly disarm an irate coach without a confrontation.

“I don’t stick around long to talk to coaches,” he said. “One quick thing, I’m gone. Ask anybody who’s got the best one-liners.

“The only thing on my mind when I’m out there is that game. I don’t worry about what goes on beyond, I don’t care what people say. Catcalls don’t bother me. Most of the time I don’t get them.”

Basketball is his favorite sport, for two reasons.

“No. 1, it has a clock,” he said, meaning it doesn’t drag on like those interminable baseball doubleheaders in Michigan’s bitter springs.

“Then, split-second decisions. You’ve got to take that picture, develop it, and call it. I take a picture first, like I’m holding a Polaroid in my mind. Develop it. Now you’ve got your call. If you can hold back on that whistle that long, you won’t have any problems.

“In football, you’ve got an extra chance. You can always pick up that flag. It’s awful tough to pick up a whistle.”

What’s the toughest call in basketball?

“The block/charge, by far,” Johnson said without hesitation. “That’s why you ref the defense. You don’t ref the offense. You’re going to know what’s going to happen by watching that defensive player.

“The offensive player has control of the ball, but that defensive player, you’ve got to see how sneaky he can be. Is he there? Does he have both feet planted before that charge? If you watch the defense, you’re going to know if he’s there.”

In football, Johnson has worked with the same crew for almost 15 years, including Pat McKenna. The two have been officiating partners in all three sports for 39 years.

In baseball, he prefers the plate to the bases because it keeps him in the game on every pitch. Johnson is not a fan of down time, even at home.

“I’ll get up and clean the house just for something to do,” he said.

Including middle school and youth leagues, he will ref 9-10 basketball games a week in the winter. In the spring he’ll work 2-3 baseball doubleheaders. Fall is a relative breeze with just 11 football games.

In all three sports, position is the key.

“You’ve got to get angles,” said Johnson. “You have to hustle to get those angles.

The exercise he gets as a byproduct is what keeps Johnson going. At age 62, he is in peak condition and has no intention of slowing down, let alone retire from officiating.

“Until I can’t walk,” he says of his plans to continue. “Or until I embarrass myself.

“Some of the best times of my life have been in officiating. If I can’t keep up, I’m done. I’m not going to hang in there until it gets to the point where they’ve got to pull me away.”