A little board humor 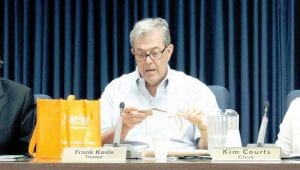 Trustee Frank Kasle gave Trustee George Menoutes a rock fragment blasted from the Crazy Horse Memorial in South Dakota, with humorous instructions on how to use it.

FLINT TWP. — A couple of humorous gifts came with Trustee Frank Kasle’s report to the township board about what he did on a recent vacation.

He presented a “talking stick” to Supervisor Karyn Miller and a blasted granite rock chunk to Trustee George Menoutes.

Kasle explained that both souvenirs were purchased during a recent bus trip with his wife, daughter and granddaughter that included stops in Western Wyoming at Yellowstone National Park and Buffalo Bill Cody’s Ranch and ended up at Mount Rushmore National Park and Memorial in South Dakota.

While most tourists are familiar with the faces of four U.S. presidents carved into the granite face of Mount Rushmore, many are not aware of a much larger memorial being carved into the face of a nearby mountain, Kasle said.

The Crazy Horse Memorial depicts the Lakota Indian Chief best known for being instrumental in the defeat of General George Custer and troops at the infamous Battle of Little Big Horn, also referred to as Custer’s Last Stand.

The memorial and attached museum and gift shop were created to preserve the culture and heritage of all North American Indians. Kasle purchased his gift items there.

Reading from a label on the talking stick presented to Miller, Kasle said Native Americans used them for centuries as a simple method of keeping order at council meetings. Only one person is allowed to speak at a time and that is determined by who is holding the stick. As the stick is passed around, all members get to give an opinion equally and without interruption. Often a time limit is set to give all speakers an equal chance of expressing opinions.

“You can use it as you wish,” Kasle said, as he handed over the artifact to Miller.

The chunk of rock Kasle presented to Menoutes was a blast fragment from the Crazy Horse Memorial, purchased for $2.

Begun in 1948, blasting is ongoing on the memorial but work has been completed carving out the chief’s ace. It is estimated that it will take another 50 years to complete the entire carving, which will depict Crazy Horse astride a horse, Kasle said.

“This (rock fragment) is to be used in case Karyn does not pass you the talking stick,” Kasle jokingly told Menoutes, evoking laughter from the audience.

Kasle also said the Crazy Horse Memorial, so far, is very impressive. The head is larger than those of all four Mount Rushmore presidents combined, he said.