Travelers to the General Motors plants and Bishop Airport endured several months of inconvenience while Michigan Department of Transportation crews built a traffic roundabout on Bristol Road near the airport.

FLINT TWP. — A water contamination crisis in the city of Flint spilled over into the township, affecting residents and business owners all year.

2016 also was an election year that generated lots of local and national controversy.

Interest in renaming the township surfaced again in the wake of the Flint water crisis and led to the formation of a committee that is now exploring what is possible.

A roundabout built on Bristol Road created traffic delays and detours for several months in the vicinity of Bishop Airport and the General Motors plants.

Those were among the top news stories affecting the township in 2016. Flint’s water crisis made national headlines in January and that is when concerned calls about township water began pouring in. Numerous business in the township began posting public notices to reassure customers that the township water supply comes from Detroit, which is deemed safe, and not from Flint whose water problems resulted from using Flint River water. In February, township officials worked with the West Flint Business Association to take out radio ads on behalf of township restaurants worried about losing lucrative Valentine’s Day business due to public panic about drinking Flint water.

Curiosity seekers had an all-day opportunity to view Air Force One in person while it was parked at Bishop Airport during a May visit from President Barack Obama. Right, in fallout from the Flint water crisis, businesses throughout the commercial district posted resorted to posting public signs to reassure customers that they were not supplied by contaminated Flint water.

Only about 50 Flint Township residents who live on Flint’s borders were actually affected by the tainted water supply including single-family homes and some apartment complexes. They are Flint water customers through a franchise arrangement because township water lines were not accessible or not hooked up.

Flint Township’s woes drew attention from officials in Thornton Township in Illinois who traveled here in February to deliver two truckloads of bottled water to residents at Sunridge Apartments on Flushing Road.

Many area churches and social groups also kicked in with bottled water drives and distributions to help those affected by the Flint water crisis. 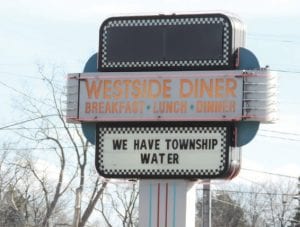 Flint’s water crisis also gets the credit for renewed interest in Flint Township distancing itself from Flint’s reputation. At the February 1, township board meeting Trustee George Menoutes was the first to broach the name-change idea. His concern was motivated by stories he heard about Flint’s problems negatively impacting investors interested in opening a business in Flint Township, he said.

Township Karyn Miller said she would consult with the township attorney. She previously convened a name-change committee in 2012 that decided not to pursue the idea. The name-change movement picked up steam in late summer at the request of Kevin Stiff, an upset business owner.

The committee began meeting in September to explore issues such as ZIP code changes, insurance rates and the advantages of converting to a city versus changing the township’s name. The committee now is set to hold a public hearing at 6 p.m. on January 12 at the township hall to take comments and suggestions from residents, business owners and all concerned. 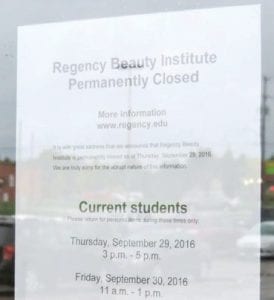 Regency Beauty Institute on Miller Road was one of two specialty schools that closed abruptly this year.

Also in response to Flint’s water crisis, President Barack Obama visited here in May, He flew in on Air Force One which was parked all day in full view at Bishop International Airport, drawing a steady crowd curious to see the presidential plane up close.

Locally, the entire township board was up for election, drawing 15 candidates including two for supervisor, three for treasurer, four for clerk and six for trustee. The winners technically chosen in the August election took office after the November election. The seven-member board now has four new members — a majority.

Four new members -a majority – were elected this year to the township Board of Trustees.

As for the new roundabout on Bristol Road, the roughly three-month construction period of the $3 million project probably seemed a lot longer to those who travel the route daily to get to the airport or GM plants or other points east including Baker College-Flint. Despite delays and detours, the project, which began on July 6, proceeded smoothly and finished on time and on budget in late October. It included constructing the roundabout and reconstructing several ramps to and from I-75, as well as the driveway to the GM plant. The project is designed to alleviate a long history of serious traffic crashes in the area.

On the commercial front, the year saw development of at least three new restaurants – Five Guys, iHop and Chipotle – all on Miller Road but also saw the closing of the Sports Authority sporting goods store.

Probably two of the biggest shockers were the abrupt permanent closings of the ITT Technical Institute in September and the Regency Beauty Institute in October. Both “overnight” closures were attributed mainly to changes in federal financial loan support.

Also of note this year were deaths of several well-known township residents. Former Supervisor Doug Carlton died in February and former Fire Chief Greg Wright died in December. Also the year began on a sad note in January when township police officer Steve Parker was killed in a tragic traffic accident on southbound I-75.