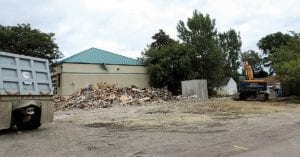 (fresh photo cutline. get rest from archives) The longtime Corunna Road site of Happy Valley Chinese restaurant and most recently Shrimp “More seafood diner is now a parking lot. A fire damaged the restaurant in May and it was subsequently torn down.

FLINT TWP. — A police shooting, passage of a controversial ordinance to prevent panhandling, a push to renew the road millage, two police lawsuits and a surge in new development were among the top news events this year in Flint Township.

The year started out with the passage on January 5 of the controversial Traffic Safety Ordinance that banned passing money into or from a vehicle while it is in traffic. It evolved from a proposed Begging and Soliciting Ordinance aimed at curbing the growing visibility of panhandlers on street corners in the township.

The ordinance took effect March 1, after a leniency period, and had the desired effect of ending street corner soliciting. But its down side surfaced in December when it also meant that the Old Newsboys would have to conduct their annual newspaper street sale from the side of the road. No other charities have been known to complain about the new ordinance.

A township police officer was shot January 23 during an incident at the Hometown Inn on Miller Road, a known trouble spot. The shooting reportedly occurred at about 10:35 p.m. in the motel parking lot after Officer Michael David Schuyler, a two-year veteran on the police force, made a traffic stop. The trouble started when Officer Schuyler attempted to arrest the driver for multiple misdemeanor warrants. Christopher Aaron Washington, 55, who was a resident at the motel, allegedly resisted arrest before pulling a handgun and firing multiple shots at Schuyler. Washington also shot at officers from Swartz Creek who responded to an “officer down” call for assistance. They returned fire and Washington was shot multiple times before being taken into custody. Both Schuyler and Washington were transported to the hospital where they underwent surgeries.

In the aftermath of the shooting, Prosecutor Leyton filed a legal complaint against the Hometown Inn, seeking to shut it down for one year. The Complaint for the Abatement of Statutory Nuisances was approved in 67th District Court in early March. It cited Inn owners and managers with at least 40 instances of ongoing criminal activity including prostitution, armed violence, domestic violence and narcotics activity.

Leyton reached an agreement with the owners to close the inn for three months while mandatory improvements were made including adding 24-hour security guards, a security gate at the entrance; fencing around the property; surveillance video equipment to monitor activity; and limiting guests to seven-day stays except under extenuating circumstances such as a house fire.

After making the improvements, the 119-room Inn reopened in early May, about two months after it was closed.

It took two ballot attempts but township officials were successful in getting voters to renew a ten-year road millage needed to help repair township roads that are not covered by county, state or federal funds. That includes subdivision streets.

Voters shot down the millage renewal on the May ballot where it was placed alongside a controversial state road funding plan that also went down in flames. Township officials decided to try again on the November ballot and were successful in passing the .50 millage. Voters also agreed to renew a five-year millage to pay for fire equipment.

The 10-year road millage was first approved in 2006 and expires at the end of this year. It generated about $6 million dollars for local road repairs. The millage renewal is for 2016-2025 and is expected to generate about $399,200 in its first year.

The Police Department got hit with at least two major lawsuits – one stemming from a wrongful arrest involving an Open Carry Weapons incident and another an Excessive Force suit filed by the family of a young man killed by a police officer during a traffic stop on Flushing Road.

John David McMorris filed the wrongful arrest lawsuit in February 2014 claiming his civil rights were violated when he was arrested on Christmas Eve 2013 on charges of carrying a concealed weapon (CCW). McMorris argued that he was openly carrying a handgun, as allowed under Michigan law.

His civil rights suit was put on hold when the Genesee County Prosecutor’s Office filed criminal CCW charges against him. In April, a Genesee County Circuit Court judge acquitted McMorris of the criminal charges, clearing the way for his civil suit in federal court to proceed against the township police department.

A settlement in McMorris’ favor was reached in late July.

In a separate case, the mother of Dominique Lewis filed a lawsuit April 20 in Detroit U.S. District Court alleging wrongful death after her son was shot and killed July 16, 2014, during a traffic stop on Flushing Road near Eldorado Street in Flint Township. Lewis was a passenger in the back seat of the stopped car but is alleged to have climbed into the front seat and attempted to drive away, nearly striking the officer who fired the fatal shot. The case is still pending.

As the saying goes, when one door closes, another opens. Likewise, the township said goodbye to several longtime businesses including two institutions of higher learning and several restaurants. But it also saw a spate of new builds along the busy Miller Road corridor.

Spring Arbor University and Davenport University- Flint both moved out of the township this year. Patrons also saw the end of Don Pablos, Thompson Creek and Salvatore Scallopini restaurants. Also the Shrimp ‘N More restaurant on Corunna Road was torn down after being heavily damaged by a fire in May. It was the former site of a long-standing Chinese restaurant and is now a vacant lot.

But lots of new places to eat moved in including Texas Roadhouse and a Potbelly’s sandwich shop on Miller Road, the former site of a car dealership. Five Guys and a Burger and a Chipotle are coming soon.

Also the former Salvatore Scallopini is being converted into an ihop that should be on track to open sometime in 2016.

Planet Fitness opened in January at the Genesee Valley Center mall. The Genesee County 911 Communications Center on Corunna Road, which also houses a Michigan State Police Post, was expanded to make room for the addition of City of Flint 911 operations.

In one of the biggest developments, plans were approved for a multi-million dollar Planned Unit Development to be built on the site of Pirates Park. It will include a four-story hotel with a small convention center, a three-story climate controlled storage facility and an 80-unit assisted living facility for residents 55 and older.

Developers Pitt Penn of Farmington Hills said construction of the storage unit should get underway by spring of 2016, followed by the hotel and convention center, which they hope to open in 2017. The assisted living facility would be built in the third and final phase of the development.