A moment in time 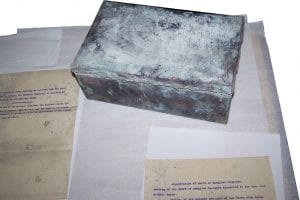 One of the copper boxes that were found sealed in the original cornerstones from Hurley Hospital.

FLINT — In 1927 you could stay in a room at Hurley Hospital for $5.41 a day. To apply for a job to be a nurse back then you only needed an elementary school education and had to fill out a one-page application.

These are just a couple of the discoveries made by the staff at the Sloan Museum in Flint as they opened two time capsules taken from inside cornerstones discovered at Hurley Medical Center this summer during excavation for the hospital’s new emergency ward.

The contents of the boxes, placed in the cornerstones of the 1907 hospital and the current site built in 1927, were on display at the Sloan Museum Jan. 13 during a reception held by the museum and hospital.

“Hurley has been serving this community for 103 years, there’s not a lot of hospitals that can say that,” said Hurley President and CEO Patrick Wardell. “What we’re hoping to learn from the contents (of the time capsules) is what it is about (the hospital’s) founding that has kept it going all these years.” 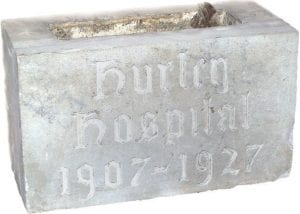 Wardell said one thing that stands out from the contents of the boxes found inside is there was strong public support for the hospital, both in 1907 and 1927. That support, he said, is one likely reason for the hospital’s century of success.

Wardell said the contents were well preserved, with the 1927 box still completely sealed and in tact. The 1907 box had sustained some damage over the years and had experienced water leakage at some point, but the documents inside had dried and were in good shape, he said.

The 1907 box was made of copper with the name “Joe Dugan” written in mortar. It’s contents included an Oct. 23, 1907 copy of The Flint Daily Journal, mimeographed papers listing the names of Flint members of the Knights Templar and the Masons, a listing of the mayor and city council for Flint at the time, the will of James J. Hurley which bequested money and property to building the hospital on and other hospital related documents.

Danita Roberts of Clio, an employee of Hurley Medical Center, views the contents of the 1907 and 1927 time capsules at Sloan Museum, Jan. 13.

The 1927 copper box also contained a newspaper from the time, the hospital’s annual year-end report, a list of city officials, the City of Flint Charter, a sealed envelope which has not been opened, city council proceedings relative to the issuance of bonds for construction of the hospital and other significant documents surrounding the hospital.

Jane Macintosh, curator of collections for Sloan Museum, said it took her staff about 4-5 hours to open the well-sealed boxes. The entire procedure was done under special conditions — which included masks, gloves and ventilation — to keep the contents preserved.

“You never know what you’re going to find,” she said.

A group of present-day Hurley employees who viewed the contents at the reception said what they found was a good look at what life was like 83 and 103 years ago.

“It’s all pretty fascinating,” said Danita Roberts of Clio, a 29 year employee of Hurley Medical Center. “I think the most interesting thing was that it cost $5.41 a day for a room at the hospital in 1927.”

Lew Moquin of Burton, who has also worked for the hospital for 29 years, said he was mostly surprised at how well-preserved everything was.

What Moquin said he found most interesting were the financial statements of those times. But, he admits, he had a bigger curiosity about the contents of the newspaper from those eras.

“I’d like to open up those newspapers and see the sport section from 1927,” he said. “Hopefully they’ll make copies of everything. I’m sure these are things all the employees of Hurley would like to see.”

Macintosh said she and the Sloan Museum staff have enjoyed working on the project.

“It has all worked out very nicely,” she said. “It was a nice project, I’m happy to have been involved.”