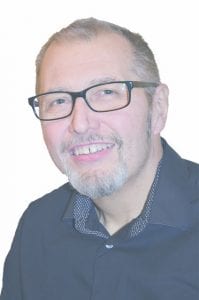 (Editor’s note: This is the first in a five-part series where I will recount my battle with cirrhosis of the liver and the life changing transplant I received in September. My story is an account of how I overcame my illness, but mostly I hope to heighten awareness about the organ donor program. I will be a lifelong advocate for organ donation and I want to make others aware of the disease cirrhosis and how to prevent it. Additionally I want to raise awareness about what having the disease is like, how it opened my eyes about many things and what treatments and assistance is available to people who find themselves also in need of a transplant.)

W hen you have youth, or feel youthful, you may believe, as I once did, that you are invincible. For most of my life I believed poor health and the threat of death was something you didn’t have to worry about until later in life.

I learned the hard way if you don’t take care of yourself you can leave this world at any time. Granted, people of all ages die – some due to illness, others because of tragedy – but many of us never think our time is coming until we are old.

I ignored my first wakeup call that something was wrong with my body. It happened in 2012 when I went to see a doctor for the first time in more than 10 years. After standard blood work was done, my doctor informed me there were irregular readings in my lab work, elevated liver enzymes which prompted more testing.

Eventually the doctor gave me the news: I had cirrhosis of the liver.

There were several causes for my disease. First, I had obvious issues with the bile ducts in my liver which initially brought the diagnosis of biliary cirrhosis of the liver. Lifestyle also played a part, it turned out. At times in my life I had been a heavy drinker. The alcohol had also further damaged my liver and I was told I needed to stop drinking then to keep the disease from worsening faster.

If I had followed my doctor’s orders, I would have plenty of time before I needed a transplant.

In the beginning I stopped drinking. Months went by and slowly I returned to old habits – I resumed drinking. I felt fine and I was showing no notable signs of the liver disease so I decided, in my infinite wisdom, it was OK to drink.

My body, however, did not agree with my decision.

In 2016 I found myself in excruciating pain from a sciatic nerve ailment and after trying many medications, I resorted to alcohol to try and relieve my pain. After a summer of drinking I ended up taking off work to deal with the pain. But before I could see a surgeon about my back problems which were causing the sciatic pain, I became very, very ill.

I went into the emergency room of an area hospital in late October of 2016 and was diagnosed with kidney and liver failure. I also had ulcers in my stomach from consuming too many over the counter drugs to help alleviate the pain. At that time I confessed to everyone I had also been drinking a lot…a blatant disregard of my doctor’s orders.

A young attending doctor in the ER looked down at me on the hospital bed and said “if you take another drink, you will die.” It was a sobering moment, both in terms of alcohol use and of this notion I had of being indestructible. But deciding it was time to get serious about my health, and about this wonderful life I had been taking for granted, came a little too late. Doctors found I had end-stage cirrhosis and would now require a transplant sooner than later.

The doctors nursed me back to health and sent me home, where I would spend more than a month recuperating before I could return to work.

I suffered a return of toxic fluids backing up into my body in January of 2017, this time in my chest, where it compressed one lung completely. I spent a week in a Flint hospital and another week at Henry Ford Hospital in Detroit. It was there the liver transplant specialists performed testing on me to get me ready for the liver transplant donor recipient list, after removing several liters of fluid from my lungs.

Due to my consumption of alcohol up until October of the prior year, I was on a six-month hold to be sure I would remain alcohol-free. I would not be on the list until April 2017.

The disease became very real to me during this time. I required oxygen, my coloring became jaundiced, as did the whites of my eyes and I grew more and more fatigued as time went by. By the time I was listed as a donor recipient, I was scared. I had to accept the idea I might not live long enough to receive a new liver.

It became a waiting game, a race against time. Would I receive a liver before mine failed, or would I reach the end of the road?

I was no longer invincible, as I had once believed. Finally I realized just how fragile life really could be.