A Night to Remember…

Family recounts story of ancestors who were aboard the Titanic 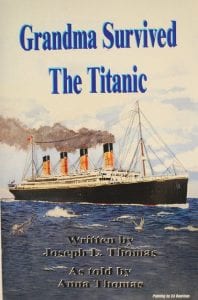 BURTON — Anna Thomas of Tibnin, Lebanon, was bound for Dowagiac, MI, when she boarded the R.M.S. Titanic in April of 1912 to make the crossing from England to the United States.

Thomas, who did not speak a word of English, boarded the doomed ocean liner with her two children — Mary and George — and sailed off for America, and into history.

On the cold night of April 14, 1912, Titanic struck an iceberg and sank in the North Atlantic Ocean. Only 705 made it off the ship alive, while 1,513 perished in the freezing cold waters .

Anna, who had been lodged below deck with steerage, survived the sinking because she injured her hand during the impact with the iceberg. She was taken above deck to the infirmary, which led to her place in a lifeboat the morning the Titanic sunk to the bottom of the ocean.

She and her two children survived and were rescued along with other passengers, and eventually made it to New York City. Later, in Michigan, Anna’s son George had two children George and Joseph Thomas. 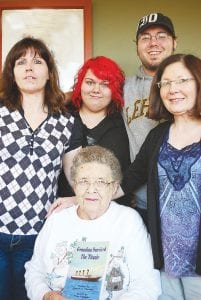 George would become the first mayor of Burton and Joseph a published author of the book “Grandma Survived the Titanic.”

Anna lived with Joseph, his wife Phyllis and their four children until her death in 1976.

Phyllis Thomas has been retelling the story since Joseph’s death in 2008. Her two daughters, Kim Gazso and Clare Pardee, have helped keep their father’s story alive with a briefcase filled with book copies, literature and other mementos from the revered Titanic story.

Kim Gazso, a City of Burton accountant and published author, was adopted by Joseph and Phyllis when she was 10- years-old and lived with Anna Thomas.

The only time she ever heard Anna talk about the Titanic was when Anna watched a movie in the 1970s.

“A movie came out how (the Titanic) went down and one of the things I remember, we watched the movie and she grabbed my hand and she said, ‘it didn’t go down like that’,” said Gazso. “The expression on her face … I watched her relive it.”

According to Phyllis, Anna did not talk about the Titanic much and “she didn’t seem traumatized” by its sinking.

“She was a very strong woman,” said Phyllis Thomas.

When Phyllis Thomas was asked how the Titanic story affected the first mayor, she said George didn’t talk much about the Titanic and that he was a “very humble man.”

The family continues to answer questions 100 years after the Titanic disaster.

“When you are younger you don’t realize how amazing it (Titanic) is and when time goes on you start to learn more history about it and you are in awe of it,” said Clare Pardee. “It is surreal.”

Anna’s great-great-grandson, William Davidson, gets asked questions by his peers.

“I always get asked what it was like to grow up with my grandfather and then the stories he told about his grandmother,” said Davidson. “So he’d get a lot of questions about the Titanic.”

Anna’s great-great-granddaughter Maygen Pardee said she “was amazed that something that big could happen at any time.”