A piece of history

Applegate Farm to be sold after 70 years with family 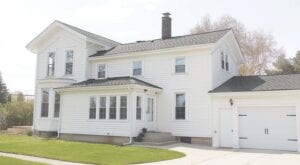 The Applegate farmhouse at 2457 E. Grand Blanc Rd., built in 1872, was recently listed for sale. Photos by Gary Gould

GRAND BLANC TWP. — For Bob Applegate, selling his family home and barn after more than 60 years will leave him with a lot of memories, but he can still make a few more with the projects salvaged from the collection he and his father left unfinished.

Applegate and his wife, Jeniel, are selling the family’s farm, located at 2457 E. Grand Blanc Rd., a 149-year-old farmhouse, considered to be one of the oldest homes in Grand Blanc, and a gargantuan barn built by him and his father 30 years ago.

Built in 1872 by John P. Adams, the farm once consisted of the house, a barn and about 200 acres of property – all of which today is a sprawling, but quiet subdivision which has built up over the years since the Applegate family moved there in 1957. 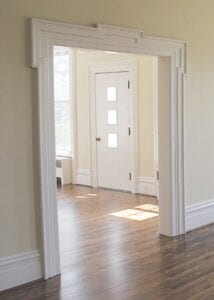 A sample of some of the authentically restored woodwork inside the farmhouse.

Applegate said he and his family moved in when he was 3 and he fondly remembers playing with his siblings at the farmhouse when he was just a boy. The family moved into the home, which was a duplex at the time, to accommodate their family and to give Applegate’s grandmother a place of her own to live.

As children, Applegate and his brothers helped their father fix up the farmhouse, even having to take apart an exterior wall every year to remove the straw and mud insulation and replace it with 6-inch insulation throughout.

“Fixing up the house from the time I was a kid, it made me appreciate things better,” he said. “When something gets old or dirty, you don’t just replace it, you clean it up and make it work again. We did a lot of that – and I’ve continued that.”

After his father passed away in 1995 and his mother in the early 2000s, Applegate said he began to rent out the duplex home, but after years of having to come in each time a renter vacated and repair the damage left behind, he said he finally decided it was time to put the historic home and unique barn up for sale. 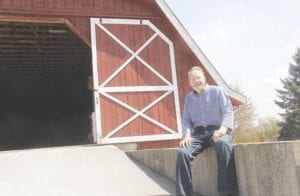 Bob Applegate sits in front of the two-story barn he and his father built in the 1990s.

“It would require a great deal of clean-up each time someone would move out,” he said. “That’s not so easy on a 150-year-old farmhouse.”

One renter left and allegedly took the original doorknobs to the house with them, which Applegate said is something you can’t replace by just running to Home Depot. To replace the missing doorknobs, he said he had to go on eBay to search for replacements. It was then the Applegate’s decided it was time to sell the house.

Applegate said the farmhouse is something builders today wouldn’t build, with a structure designed to last for years. The house is built on 8×10 logs and contains immaculate trim throughout, much of which Applegate said he had to replace and cut it with customized knives to make it look like the original.

“I had to literally have knives cuts to make the moldings and trim,” said Applegate. “I had the first ones made, I pioneered that. It’s called the Applegate Trim Knives and they are available at Michigan Lumber.”

He likened the trim in the house to that of the Oval Office in the White House, adding that the only difference is the Applegate woodwork is more detailed.

“The integrity is still there,” he said. “The trim is still amazing in the living room and dining room.”

In the 1990s, Applegate said he and his father had the idea to acquire land to the east where an old barn sat and they began work on a massive barn to house the many car, truck and tractor restoration projects they had begun to collect.

The work on the barn lasted three years and the father and son team, joined by a third man who helped with the barn’s heavy construction, slowly took shape next door to the farmhouse.

Massively reinforced in every way possible, the two-story barn needed to be able to support a number of cars, trucks and tractors. On the exterior the barn is 72-feet long, 42-feet wide and approximately 35-feet high, which includes a concrete ramp to the upper level.

Last year, he said he submitted the barn to the Michigan Barn Preservation Network as an entry for “Barn of the Year.”

While the barn didn’t win in the category, he did receive a letter and plaque from the organization designating the barn as a “Great Michigan Barn.”

He said he plans to resubmit the application again this year, but said the recognition was nice considering the work he and his father put into the barn.

“My dad and I built the barn because we enjoyed cars, trucks and tractors. We’d redo something, then leave it outside,” said Applegate. “My dad said, ‘we’ve got to build a barn here’.”

The township allowed them to build a two-story barn, doubled the size because of the cars, trucks and tractors. He said they had to make it extremely heavy duty so they could put anything in there they needed too.

“We got close again because of the experience of building the barn and planning these projects together,” he said of his father, then adding sadly, “and then the darn guy went a died on me.”

Applegate said after his father died, he closed the doors on the barn and locked everything inside, leaving it for 25 years until last year when he and Jeneil decided it was time to clean out the barn and sell everything.

The couple held an auction in December and got rid of about three-quarters of what was inside. Applegate said he wanted to keep everything, but knew he was getting too old and would never get around to working on all of it.

“I sold three trucks, 14 tractors and probably just under 100 other items in the auction that were all stored in that barn,” he said. “Empty, you could probably park 20 cars in the bottom level, if you parked them tight.”

Overall, Applegate said it was hard to let go of some of the prized possessions he and his father had stored in the barn, but he thought he did “pretty good” in letting many of the items go.

“I enjoyed myself, its fun getting back into all that stuff and seeing some of the things we had in there after 30 years,” he said. “It was a big help because that was like taking the rest of my life and downsizing it. I got to touch everything again that we had collected. All those memories come up and you say, ‘I haven’t seen that thing in 25 years’.”

Applegate decided he wanted to keep about a quarter of the things he had stored in the barn, so he and his wife have built a pole barn at their home and he’ll be moving the rest of his ‘projects’ there.

“It’s going to be nice having this stuff close to me,” he said. “So, I can start working on it again.”