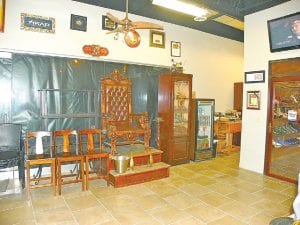 Prohibition 333 Cigars is now open in the Vehicle City Harley-Davidson store on Miller Road near I-75 in Flint Township.

FLINT TWP. — With men as a primary target customer, what better place to locate a smoking shop than in the middle of a motorcycle and recreational vehicle complex.

That was part of the strategy behind Prohibition 333 Cigars move in December to the Vehicle City Harley-Davidson building on Austins Parkway. Another reason was its proximity to and visibility from the I-75 freeway.

Formerly called Sunrise Coast Tobacco, the smoking shop was located at Pirate’s Park on Miller Road for six years, But a name change was made with the move to reflect changes in smoking laws, said Chris Fisher, manager.

Prohibition Cigars is one of few remaining public places where smoking is allowed indoors since the Ron Davis Law went into effect in 2010 banning smoking statewide in public buildings including workplaces, restaurants and bars.

“We have a smoking ban exemption,’’ Fisher said.

The distinctive aroma of tobacco smoke greets visitors at Prohibition Cigars before they even walk in the door thanks to a patio at its entrance.

The patio has become a popular gathering spot for smokers to sit and talk about politics, sports and other subjects while enjoying a smoke, Fisher said.

“Later in the evening, there can be 10 to 15 people sitting on the patio smoking and talking about whatever,’’ he said. “It’s a friendly atmosphere.”

Inside the business are tables, flat screen TVs, a walk-in humidor, and a private smokers’ lounge. Humidor locker rentals are offered for those who want to keep a private stash on site. Cigars have to be humidified to 70 percent or they will dry and crack and won’t burn well or taste good, Fisher said.

Most customers sit and smoke their purchases on the premises, he said.

Men are the target demographic but many women also come in three or four times a week to enjoy a smoke, Fisher said.

Prohibition has three employees, or tobacconists as they are called. They are not currently hiring.

Decorative touches inside the store include a cigar store Indian the owner found in Arizona by the owner, an ornate antique shoeshine chair that is strictly a conversation piece now and a miniature remote-controlled Harley-Davidson motorcycle donated by a customer.

The store sells cigars and pipe tobacco. Rocky Patel and Fuente are among best-selling cigars but aficionados also regularly indulge in flavored pipe tobaccos including Michigan-cured cherry blends. Amaretto and hazelnut are other popular aromatic blends.

The store has about 50 blends of pipe tobacco, Fisher said. Pier 26 is a favorite because its aromatic and not offensive to non-smokers, he said.