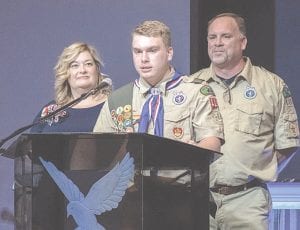 Joshua Orrison is flanked by his parents during his Eagle Scout Court of Honor ceremony. Provided photos

FLINT TWP. — Joshua Neal Orrison, 16. a sophomore at Carman Ainsworth High School, earned the rank of Eagle Scout in a June 16 ceremony but he has gone even further to achieve an Eagle Palm which requires earning 5 badges over Eagle Scout requirements.

For his required Eagle Scout project, Joshua designed, built and installed an outdoor seating area for children to safely wait for parent pick-up at Greater Heights Academy charter school, 3196 Pasadena Ave, This waiting area is equipped with a free library to encourage children to read while waiting.

Joshua was inspired by his own elementary education experience in which he had to overcome speech, reading and writing challenges. School safety was another important focus of his, and he served as a safety patrol leader for many years.

The son of Jeff and Lisa Orrison, Joshua is a fourth-generation scout, following in the footsteps of his dad, his grandfather Ron Orrison and his great-grandfather Garold Dice. 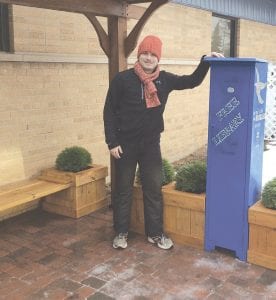 Joshua began his scouting venture in the first grade at Randels Elementary. He served as a troop chaplain for 4 years, as well as holding his rotation in the position of senior patrol leader, during which Troop 110 earned Honor Troop status at Cole Canoe Base.

Joshua is a member of the Order of the Arrow, one of Scouting’s nominat- ed designations only achieved by completing an ordeal involving service and self-sacrifice.

“When I started out as a Cub Scout it was just fun,” Joshua said “All it really takes to be an Eagle Scout is a willingness to listen, learn and go and do. I am truly humbled by this experience and can only encourage to live in grace, for God, with a heart of service and friendship for one another. The Scouts have a code of “Leave No Trace” when we are camping. I believe we should have the opposite code for everything else. We should positively influence others and leave a trace of goodness – all the characteristics in the Scout Law – behind us. No matter what, we should always leave a legacy worthwhile.”

“Josh’s conduct on the trail has been excellent.,” said Tim Butcher, scoutmaster of Water & Wood Council, Troop 110. “He has earned this honor through some hard knocks, and hardy laughs. With the honor comes the responsibility to fulfill his solemn obligation to do his duty to God, to country and mankind in general. Scouting is one of the most wholesome and significant movements in the world’s history. Working with these young people, like Josh, gives me great hope for the future of our great nation.”

Joshua was the C-A freshman class president during the 2017-2018 school year.

He also served as a Blueberry Ambassador while attending Carman Ainsworth Middle School.

Joshua plans to continue to participate in Scouting, helping younger recruits, and joining Order of the Arrow activities; while he is an active member of the Hill Creek Church youth group.

Joshua also loves the outdoors and enjoys camping, kayaking, hiking, fishing, and swimming in Michigan. He looks forward to many more adventures.

He is interested in pursuing a career in law enforcement, and possibly the military.