A trip to Mackinac Island: then and now 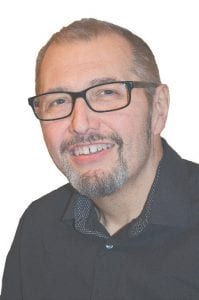 Anita and I traveled to Mackinac Island a couple weeks ago for a few days of rest and relaxation. Neither of us had been to the island in some time – for me something like 26 years had passed – so it was interesting to return to a place I had enjoyed when I was younger.

Most of the time I had spent on the island was during trips I made as a kid with my mom back in the 1980s. Those are the trips I remember fondly, especially since they were taken in the years after my dad had passed away and mom and I formed a tight bond.

Comparing this trip to my first time there, I have to say one of the biggest differences now is my mobility. As a teen I remember hiking the wooded trails and biking around the island.

Arriving this time, one of our first stops was to venture up to Fort Mackinac and everything was great until I got about half-way up the steep path up to the fort. It was grueling. My 51-year-old self was amazed that my 15-year-old self made that hike all those years ago. Now granted, I’m still “technically” on the mend from major surgery last year, but I stopped no less than three times to take a breather going up that hill.

This played a factor in our later decision not to rent bicycles to ride around the island. I was pretty sure I’d be exhausted if I tried to bike the 8.2 miles around Mackinac. As it was my trusty Fitbit told me I walked 20,000 steps my first day there and 18,000 the second day. Pretty good for an old codger.

Our decision to stay on the island for two nights was also a change from the past. I’d never stayed on Mackinac Island when I was younger, always making it a day trip and staying on the mainland. Two days there was not only fun, it was relaxing. When the crowds leave Mackinac and take the boats back, the town there turns into a quiet, peaceful place. We enjoyed a stroll along the water, saw a beautiful sunset and took a tour of “haunted” spots on the island, which was a lot of fun. This was something I’d never done in past visits, but I want to do it again when we go.

Something I enjoyed seeing was how kids who stay on the island aren’t indoors glued to video games or cellphones. It was nice to see kids out riding bikes, having fun and playing. While the island isn’t a total disconnect from technology, it is a diversion from it and I think I found that to be one of the nicest aspects of the trip.

So I’m looking forward to going back and I’ll probably tackle the big hill up to the fort again, but I’m not going to attempt to ride a bike up any of those hills. I’ll leave that for someone younger and more daring.