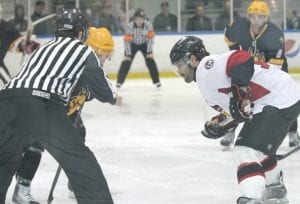 The Lapeer Loggers are slated to continue play Friday despite losing their coach and owner.

LAPEER — The New Year started on a sour note for the All American Hockey League’s Lapeer Loggers hockey team and its fans, after Lorne Knauft confirmed December 31, that he has resigned as coach after team owner George Harrison walked away from the team without explanation.

“Seems like the owners and the league have taken no financial responsibility for this organization,” Knauft said last Friday. “They are behind in payments to just about everyone involved, including myself. I believe they may not even have workers comp or insurance if a player were to get hurt. At that point, I felt I could be held responsible for any player who got hurt and believe it in my best interest that I step down at this point.”

AAHL Commissioner Rod Davidson had very little new information Monday, but was told by Polar Palace general manager Janet Mann that the team had a new investor interested who reportedly had met with the arena owners Saturday.

“Lapeer has not come back to us officially as far as a new owner,” Davidson said. “I had a brief conversation in person with Ms. Mann on Thursday afternoon and four conversations with Lorne. Lorne gave me a 9 p.m. deadline and said that if he did not have resolution by that time, he would resign. At this point, the league is waiting on the arena to allow the league to take the team over until a new owner is found.”

Rick Burrough, owner of the Polar Palace, commented Tuesday, “We’re unhappy that they (Loggers) have run into some financial turmoil. They are a customer of ours at the Polar Palace. We rent ice to them, but we have no ownership in the team. We wish them the best to resolve the situation.”

Davidson had confirmed late last Friday that the league had taken over immediate operation of the team and Davidson was behind the bench when the Loggers played Battle Creek at Battle Creek. After a new owner was not announced Monday as expected Davidson issued the following statement on the League’s website: “The All American Hockey League (AAHL) announced today that due to mounting debt the AAHL is forced to step in and seize control of the Lapeer Loggers franchise. The AAHL is in negotiations with the Lapeer Polar Palace management to allow the Lapeer Loggers to continue operations during the ownership selection process for this franchise. The Lapeer Loggers next home date will be Friday, January 7 at 7:30 p.m. versus the newly revived Chi-Town Shooters and the current AAHL wins record holder coach Darren Seid. The AAHL would like to apologize for the abrupt cancellation of the Sunday, January 2 game against the Battle Creek Revolution. The game will be rescheduled to a future date. Tickets purchased for the January 2 contest will be honored on the rescheduled date. For more information, contact the All American Hockey League at info@aahlhockey.com.”

Davidson said that 14 players and two goalies from the Loggers organization were in Battle Creek for the New Year’s Eve game that evening, and hoped they could also keep that core group together for last Sunday’s home game at the Polar Palace. That didn’t happen, as the AAHL could not come to terms with the arena on back rent owed by the Loggers and the team was locked out. Fans in Lapeer Sunday were greeted with bright orange signs on the door stating: “Lapeer Logger Update. As of Friday, December 31, the Lapeer Loggers have a new owner. The game for Sunday, January 2, 2011 is canceled and will be rescheduled for a later date. Tickets already purchased can be used for the rescheduled game. The next Loggers game is on Friday, January 7 at 7:30 p.m.”

Davidson noted that Battle Creek had to cancel its bus and was perplexed as to why the game was canceled since the Loggers were allowed to play at Battle Creek. Battle Creek actually gave some money to the Loggers’ players to help pay for their expenses, something he thought was very generous given the circumstances.

Knauft, clearly aggravated and deeply disappointed with what has happened in the past month added, “It’s not a direct reflection on myself or the Polar Palace and that’s who it’s going to hurt the most. My understanding is that the team is folding, but they still wanted us to play this weekend (Dec. 31 and Jan. 2). For 30 days I have heard there is an investor coming in, but at this point you have to decide to keep hanging on that those things are going to happen or draw a line in the sand and say ‘I’ve had enough’. I drew the line in my best interest.”

“I actually think we had the best team on and off the ice. I find it really disheartening,” Knauft continued. “It just sucks for the hockey community and fans in general who had supported the players and the team. We had the best attendance in the league and there is no way we should be in this situation at this point.”

Calls to the Loggers front office and personnel were not returned. Loggers former owner, George Harrison, also was put in charge of the floundering Ice Muskies team that then relocated to Wooster, Ohio, then ceased operations Nov. 16. Davidson confirmed that the league ceased operations in Wooster citing poor market conditions.

In a View Newspapers interview at the team’s inaugural press conference, Harrison had said, “We’re here for the long haul and hope the community embraces us.”

After taking over the Muskies, which was renamed the Korn Kings, he was quoted on the League’s web site: “We believe in this market and have heard some very great things. Just like in Lapeer our staff will strive for excellence on and off the ice.”

The Daily Record in Wooser, Ohio showed a similar commitment to the Wooster team as Harrison said, “We’re not going to be here today and gone tomorrow. We never spent money to come here and only last a year. We’ve talked to the staff at the arena — we expect to be here a long time.”

Davidson noted that Ryan Harrison, who works for the AAHL, has been dragged into the confusion.

“Ryan Harrison is still part of the AAHL and is not part of this at all,” Davidson said. “He is now getting dragged into the mess, but he’s done a lot of good work for the league for several years now and has been very, very helpful with hockey operations. Ryan has had to step back a little to let this all get settled and stop any further association with the team simply because his is also a Harrison.”