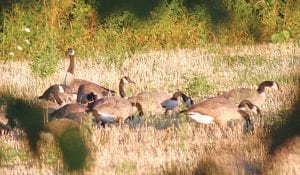 STATEWIDE
— A near-record crop of Canada geese that has been estimated by state biologists to be right around 300,000 could give hunters a dream season. The 300,000 population is second most ever recorded in the state.

The early Canada goose hunting season opened yesterday, runs through Sept. 10 in the Upper Peninsula and through Sept. 15 everywhere else in the state. Hunters have been scouting, seeking private lands to hunt and just watching and waiting since late July. Once the state’s wheat and oat crop began to be harvested, geese turned to the veritable buffets each morning and night. Hundreds of geese could be spotted on those prime fields, but with the oppressive heat back again this week, they likely will seek respite near water, rather than the hot, open fields. That could put a damper on opening day, estimated to have highs near 90 degrees.

Because of the large population, this time around for the early season, hunters can take five geese per day, possession of 10. The early Canada goose hunting season was first established as a way to manage the state’s resident population, which is thriving right now because of a dry spring and good nesting conditions.

Nearly 80% of Michigan’s Canada geese, especially in southeastern Michigan are of the Giant species. The season was chosen to not interfere with migratory geese from Ontario seeking southern nesting sites. Michigan’s giant birds, often weighing upwards of 20 pounds, stick close to home even in winter, unless their water sources completely freeze over. They venture only as far south as they need to find open water, then return quickly. Unfortunately for farmers especially, the voracious birds can decimate acres of farm crops, as well as turn off residents who found their honking, goose droppings and large numbers to be destructive and a nuisance. Because of the large numbers in state parks and recreation areas, many are open to the early season.

Hunters are asked this year to be aware of the leg bands on any geese they harvest, as those recovered and rescued from the Enbridge oil spill in and around the Kalamazoo River bear a second leg band with a special number to report their demise. If the band reads: “Oil Spill Bird Contact Michigan DNRE 1-517-336-5030”, the geese are safe to eat, says the Michigan Dept. of Agriculture, but state officials still want them reported as harvested.