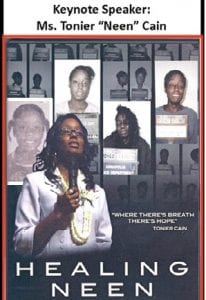 Tonier Cain will share her survivor’s story as guest speaker for the annual Motherly Intercession fundraiser.

FLINT TWP. — Tonier “Neen” Cain was a victim of child abuse at age 9. From there, her life spiraled out of control. She became a crack addict, lived on the streets for 20 years, was arrested 83 times and convicted 66.

Now she is the spokesperson for the National Center for Trauma- Informed Care of Annapolis, Md. Cain has a powerful survivor’s story to tell as she travels around the world to share her insights about trauma, incarceration and recovery.

She will be the guest speaker at Motherly Intercession’s 14th Annual” Interceding For Children” Fundraising Dinner, 6 p.m. November 9 in the banquet facility of New Creations Church of God, G- 3472 Lennon Rd.

Organizers say that proceeds from the event provide a significant portion of the annual budget for Motherly Intercession, a non-profit group that works with children whose parents are in jail or prison.

The group’s mission is to ensure that children with current or previously incarcerated parents are given support needed to “break the cycle of intergenerational incarceration.” Mentoring efforts include academic tutoring, social and life skills training, arts and culture education, civic education and family preservation guidance.

In Genesee County, 2,283 children were confirmed victims of child abuse and neglect in 2011, according to a letter to community leaders from Shirley Cochran, executive director of Motherly Intercession and Michelle Fairley, executive board president.

In fact, Genesee County has the third highest number of abuse of neglect cases among children ages 0-17, the letter stated, citing data from the Michigan League for Public Policy.

In addition to having Cain speak at the fundraising dinner, the group will also hold a raffle drawing offering prizes including a 43-inch color TV, a portrait package valued at $1,000; a $250 spa package from Somerset Salon Day spa an a leather rotating iPad case with removable keyboard.

The Flint Township Board has approved a one-day charitable gaming license for the raffle.

Cain was featured in the documentary “Behind Closed Doors: Trauma Survivors and the Psychiatric System” and also was the subject of “Healing Neen,’ a film based on her life, according to her website at www.healingneen.com.