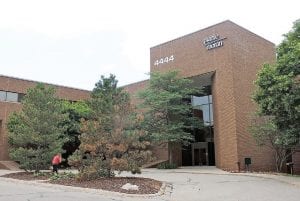 Plante Moran accounting firm has relocated to Bristol Place after more than 80 years in its downtown Flint office.

FLINT TWP. — After more than two years of searching, Plante Moran accounting has moved from its home of more than 80 years in downtown Flint to a 16,500 square-foot space in Flint Township at 4444 W. Bristol Rd.

“It was very hard to find a space that fit our needs,’’ Leslie said. “This was the only building we found that was a great fit for us. Most of what we looked at was downtown. We liked downtown. If we had found the right space, we would have stayed down there.”

Still, the staff and clients are settling in quite nicely at their new digs, which occupy the second and third level of the building. The second floor houses office and the third level is a shared space including a training room and cafeteria. 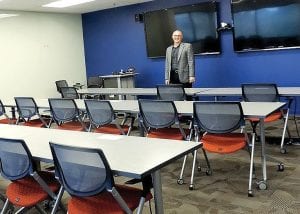 New additions like a technology-enhanced training room are one of the perks at the new office.

Being able to have the entire staff in one big open space was a huge bonus, Leslie said. The former Court Street space was a rabbit warren of offices spread out on four levels. The lower level even included an old bank level that took up a lot of wasted space, Maxwell-Cook said. Dating back to 1932, when Dupuis & Ryden, Flint’s oldest accounting firm established offices there, it was encompassed by additions built in later years. Plante Moran merged with Dupuis & Ryden in 2005.

“This was like moving out of our parents’ house,’’ joked Leslie, likening it to moving out of a house after living there a long time.

Having a better layout suits longterm growth plans for the company. They’ve hired more than 30 people in the past five years and now have room to add up to add 25-30 more employees to a current staff of about 50, Leslie said.

On the technological side of things, the new office includes upgrades such as computer ports built into the desks in the third-floor training room, Maxwell-Cook said. 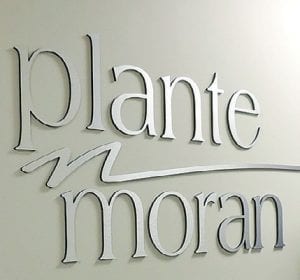 “There’s a huge influx of technology in what we do now,’’ he said.” Moving here enables us to take advantage of that.”

Another plus is having more natural light by being located on upper floors. Ninety percent of the former office was on a lower level.

Plante Moran happens to be the accounting firm for Flint Township but their services extend to individual, institutional, corporate and non-profit clients.

Leslie and Maxwell-Cook said the staff is happy with its new home and surrounding amenities.

Still having a Halo Burger nearby is another plus, Leslie said. At their former office, the longtime local favorite was within walking distance. The Linden Road Halo Burger is a short drive away from their news digs.

The staff also is eagerly looking forward to the opening of Panera Bread in the fall, which they are watching being built from a bird’s-eye perch through their office windows.