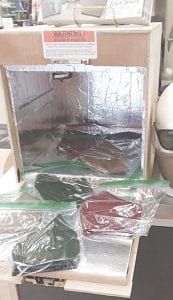 The UVC sanitation box and some of the masks Swartz sells at Davison Ace Hardware. Photos provided

DAVISON — Dave Swartz, owner of Davison Ace Hardware, doesn’t build things to make money. Instead, he considers himself a tinkerer who likes to build things to see how the science behind it works.

So, at the start of the COVID-19 pandemic, when he started making personal protection masks, he naturally wanted to find a way to sterilize those masks.

This led to him designing and building a UVC light box which will sterilize medical equipment like the N95 respirator masks used by health care professionals. The box has attracted a great deal of attention, including some from McLaren Flint which has purchased his prototype for use at their facilities.

“It’s a UVC light box that uses short wave light,” said Swartz, who also owns an Ace Hardware in Commerce Township. “I had the whole idea making masks making for three weeks before the (shelter-in-place) order came and I said to my employees if masks run out people are going to have to make their own – you can’t wait for the government to give you something.” 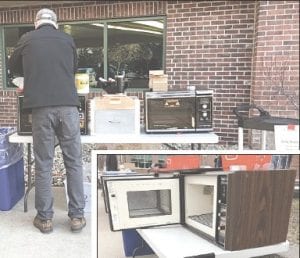 The “dirty station” in use at one of McLaren’s facilities.

He said he researched how the best equipment, the N95 masks, are constructed and learned N95 represents the mask’s National Institute for Occupational Safety and Health (NIOSH) rating. The masks filter at least 95 percent of airborne particles but is not resistant to oil.

So, Swartz said he set out the create a mask that is as close to 100 percent efficient and settled on using HEPA filters, similar to those used in vacuum cleaners, because they have a 99.97 percent rating.

“How can they make such a bold claim? HEPA filters were made during the Manhattan Project and they had to filter atomic particles,” he said. “So, they came up with the HEPA filter – it’s a rating not a brand.”

He said he made his masks using HEPA filter material from vacuum cleaners. Because the HEPA filters can be irritating to the skin he lined the inside of the mask with cotton material, like from a tee-shirt, to reduce the filters contact with skin.

Once he and his wife started making the masks and selling them on his Facebook page, he said the idea of creating something to sterilize them in came along next.

His research revealed that UVC light will kill germs, so he designed a box to sterilize the masks in which utilizes UVC light. He said he had to include many safety features because UVC light has so many damaging qualities – especially for vision because it is akin to looking directly at the sun.

Swartz said his father built the box and brought it over to his place where he installed the fail switches, LED lights and UVC lights. Once it was working, he brought it to the Davison Ace Hardware where he showed a regular customer who works at McLaren Health Management Group.

Following that, he said McLaren Health Management Group purchased his prototype, but Swartz said he didn’t create the device to make money off from.

“If it saves a single life it puts my mind at ease,” she said. “It’s better at a hospital than a hardware store.”

Greg Hood, facilities and maintenance manager for McLaren Health Management Group, and Amy Hodack, senior executive assistant for McLaren, devised a plan to build ultraviolet (UVC) sanitation devices. According to McLaren Flint, Amy called upon her brother-in-law, Steve Hodack, retired owner of American Microwave, for assistance and Steve donated 15 microwaves to the cause.

Hood, meanwhile, worked to secure UVC light donations from American Plumbing and Heating, worth several hundred dollars. He then worked with Swartz to develop a design and prototype of the sanitation devices.

Clinicians can place their tablets, phones, PPE, badges or any other item that may be “dirty” in the sanitation devices. In a matter of 20 seconds a clinician’s equipment is clean and ready to be put back to use.

McLaren Health Management Group extended its thanks to Swartz for the design help; Pat Petterson, president of American Plumbing and Heating, for the UVC light donation; Hood for coordinating donations and building the boxes; Amy Hodack for putting the team in contact with her brother-in-law Steve, and Steve for the microwave donation.

“I am happy to help in the protection of all of our health care workers and first responders,” said Steve Hodack.

The sanitation devices have been utilized in “PPE pit stops” offered by McLaren Health Management Group leadership. The pit stops are slotted for each McLaren Homecare and Hospice office location to restock supplies, disinfect equipment and answer questions and concerns regarding the COVID-19 outbreak. Chaplains are also available to employees for spiritual support.

Swartz said his first machine was available at the Davison Ace Hardware on March 25, according to the store’s Facebook page. Ironically, the next day Henry Ford Hospital in Detroit released a story through the media that it had developed a UVC sterilization unit at its facilities.

“This is not new tech,” said Swartz. “Henry Ford said they were working with a different company to develop the same thing.”

He added, “I’ve never had an original thought in my life, I’ve just repurposed stuff that was already out there. I was Mythbusters before there was a Mythbusters.”